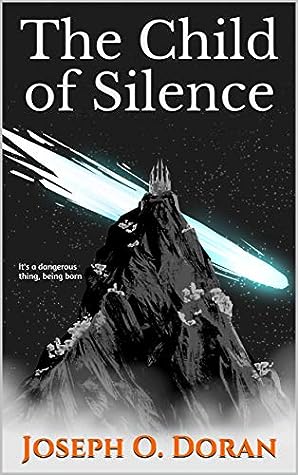 Disclaimer: Although this book is entered into SPFBO6, I was not assigned this book and this is not an official SPFBO review or score. I read it simply for my own enjoyment.

I had no expectations starting this book. The synopsis drew me in right away: a disabled (I don't like that term, but it's what most people still use) main character that can't speak, is in a wheelchair, and can barely move? How intriguing.

My first high praise for this book is the unique world-building. The bulk of the story takes place in a palace at the tip of a mountain. The nation is called Calosoa, and the capitol city is called Chalorne. It is ringed around the mountain in divisions called Circles. The higher Circle in which you reside, the more affluent you are in society. There is a caste system, with menial laborers (referred to as casted, and generally made up of people the Calosoa conquered) residing in the lower Circles, and rich merchants and military leaders residing in the upper Circles. The Colasoa are generally viewed as blessed by the two Gods, and they certainly have a very high view of themselves. They think they are smarter, more beautiful, and just better than other people. They have the ability to Songthrust, which means they can influence others through certain sounds they vocalize. They are ruled by an Empress named Telorla, who has four children who are in line for the throne in descending order - Bachan, Jeliv, Keia, and Aiata.

This story is told from the first-person POV of Aiata, a teenaged girl whom everyone assumes is a "passive being" - in this world, it means she is viewed as less than a person, since she isn't independent. She can't talk, walk, feed herself, control her bowels... in essence, the equivalent of a modern-day diagnosis of severe cerebral palsy. Since her mother is the Empress, she wasn't left to die as an infant. She is abandoned into the care of a Clerica Gerina, in a far corner of the palace. Although she is included in only very important events, Aiata is viewed with fear and revulsion - some people think that perhaps her "sickness" is catching. Gerina is the only one who isn't afraid of her, and sees to her every need. Aiata is voiceless in a society that values speech, since it controls Songthrust, making her doubly feared and hated.

The bulk of the story, as mentioned above, takes place in the palace and Upper Circles. There is a machine called a Skyway that transports people from circle to circle, a huge, snakelike thing of magic that is thought to be a gift from the Gods. All you must do is touch it, and it transports you at the speed of light either up or down the Skyway to the next Circle.

The politics of this book are quite good. The plot centers around the Sovereign family and the political machinations involved. Telorla is very rigid and power hungry, yet a clever Empress. She maintains power, and is not well-loved by her people. She is, however, respected. Bachan is a man of the people - he sympathizes with the casted and their plight - poor, bedraggled, and at the mercy of the Calosoa who have no interest in bettering those under them. As the story progresses, it becomes quite clear he feels the need to intervene, and Telorla feels threatened by her son. Aiata adores her older brother, who is the only person in her life besides her caretaker who is kind to her, or even pays any attention to her.

I can't describe to you how much I hate Jeliv, Aiata's other brother. He is the stereotypical bully, with a rather horrible streak of sadism. He makes Aiata's life a living hell - full of torture, mockery, and disdain. Telorla does nothing to stop him - as it comes out later, it wasn't that she was unaware Jeliv was horrible to Aiata... she just didn't care.

Aiata eventually learns to speak - using Pure, the wild magic vocalization that is the basis for Songthrust. It involves taking over the body of someone else to use them to speak. She develops a Legion of Weaklings made up of casted who are basically a spy system to pass on information to help protect those involved in the Legion. It originally was formed to protect again Jeliv, since his sadism was targeted at many of the Serving casted in the palace. But as the story progresses, Aiata uses it to fight against a man known as Klek. He is a mysterious casted who foments rebellion in the lower Circles, and is a master swordsman. He steals a magical breastplate and helmet that give him superhuman abilities. Aiata is concerned that he wants the throne himself, so she, along with her Legion, do their best to fight against him.

I really enjoyed this book. The main character was easy to like, although she did have flaws. She tended to be judgmental, and certainly bought into the Calosoa being better than other people line that kept the casted under their thumbs, although maybe not as much as the others of her same class. Aiata is clever, courageous, and although at times very unwise, she had a heart of gold. She blossoms as she is able to communicate with others, and soon proves she is more than just someone to be feared or disdained.

The author really hits the differently abled angle head on. He isn't afraid to touch on hard subjects... prejudice, social stigma, and how we treat those less fortunate than us. It resonated with me, having two kids with special needs myself. I appreciated the author's clear knowledge about the differently abled, and I really enjoyed his take on getting into a nonverbal person's head. At first, I struggled with the angle he took. After all, is the ability to communicate a primary way someone can advance and blossom, and unless that happens, can't advance as a person? After all, a neurotypical person should't be the judge of that; but society is already set up in such a way as to cater to the neurotypical. So in some ways, it's unavoidable to not tell a story from the position of a neurotypical interpretation of someone's character strengths and growth. After I got over that hurdle - and it didn't take me long - I really, really liked the story.

The writing was strong; there are some grammar and editing errors, as would be expected, but it wasn't as much as I had anticipated. The story doesn't suffer from badly-written sentences and the writing is easy to follow. There are some interesting elements to the plot that took me by surprise, and there were some plot elements that I could see coming from a mile away. This made the plot not as seamless as I would have liked, but the other strengths of the book (worldbuilding, characters, writing) that made this easy to overlook. The book was a bit too long, in my opinion, and had some needless scenes that didn't seem to push the story along. But otherwise, this is a well-crafted story, a fascinating world, with a stellar main character. A very solid 4/5 stars for me, and I greatly anticipate the next book in the series. Consider me a fan.

More in this category: « The Lessons Never Learned (The War Eternal #2) by Rob J. Hayes - Book review The Rage of Dragons (The Burning #1) by Evan Winter - Audiobook Review »