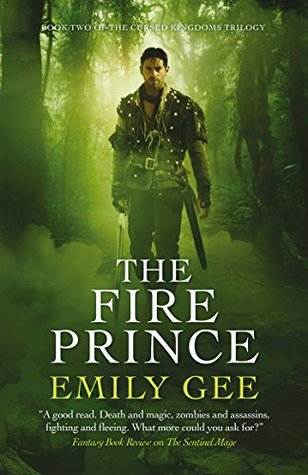 The Fire Prince picks up where The Sentinel Mage leaves off (read my Sentinel Mage review here). Harkeld has successfully taken down the first curse stone, and he now heads to the second, this one in the marshy jungle. He's pursued by Fithian assassins, and joined by the mages who have vowed to try to keep him safe. After all, only he has the blood in his veins to stop this curse from spreading across the whole world. The mages have a vested interest in making sure he gets to his destination.

Innis has a strange connection to Harkeld. They dream together, and in these dreams, their relationship is much more intimate than in "real" life. As it turns out, only healers tend to have this connection, and Innis finds herself drawn ever more to Harkeld, even when she is shapeshifted into Justen. But the secret can't last forever. Will Harkeld eventually find out that Justen isn't real? An accident happens, and it is revealed that Justen is also a shapeshifter. It throws Harkeld into a trajectory of mistrust and feeling deceived. What else are the mages hiding?

Jaume continues on with the Fithian assassins, unsure of what the future holds. All he knows is that he has finally found a place of safety with them. He is unsure of their plans, and assumes it involves helping the prince to end the curse. Little does he know they plan to do the exact opposite. How will he respond when he knows the truth? My heart ached for him. He's only eight, after all. And he's finally found comfort with this band of assassins. His story line was the most compelling for me, and his character arc was well executed by the author.

Brigitta must escape. Her brother is a ruffian at best, a conniving murderer at worst. Her brothers are in danger, too, and so she enlists the help of the ever-present armsman, as well as her servant turned friend. But their plans don't go as, well, planned. I was thoroughly engaged in her escape attempt, as well as the following aftermath.

This series is shaping up to be well done, indeed. The character arcs were well done, and the writing crisp and clean, and the plot, although predictable, wasn't boring. MY complaint mainly lies with the worldbuilding and the magic system, which are both a bit simplistic. But otherwise, I will definitely be getting the last book in the series.

3.5/5 throwing stars, and fans of clever characters, romance, and complicated friendships/relationships are sure to like this series.