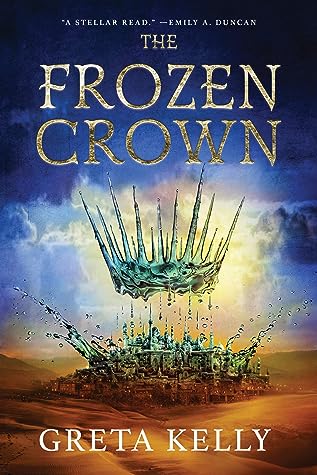 I've been ruminating on this review for a while now. Initially, I wasn't sure how I felt about this book, so I sat on it, waiting to see if my feelings changed. After consideration, I decided I really did quite like this read, although there were some things that had me thinking. I suppose that's what makes a book memorable; making readers think, and dwell on, your story.

The Frozen Crown initially caught my interest because of the gorgeous cover, and it was a debut from an author I had never heard of. I really enjoy finding new author's to watch out for, and I'll definitely be following this series.

The Frozen Crown follows the story of Askia, an ousted princess from her kingdom who must win her country back by forging political alliances to keep her country from utter ruin by a horde that has descended on her people. But she carries a secret - she can see and communicate with the dead, a nearly forbidden magic that could mean her death by a religious group intent on stamping out magic whenever and wherever they can. She meets (or rather, re-engages) with a prince from a neighboring country, and convinces him to bring her back to his father's court so she can beg for their aid against her enemies. If she can't find help soon, her people will be annihilated.

The strongest point of this story is the politics. The author really delves into the interweaving court dynamics as Askia must learn to conform and perform to save her people, as well as continue to hide her secret magic. She forges alliances while learning to set aside her normal method of dealing with people - that is, a straightforward personality that isn't quite suited for the life of a politician. She learns secrets of her past that could change everything, she learns to handle her magic, and has multiple ways she could handle saving her people. But which is the best path? One thing that I really liked about Askia was her willingness to do whatever is necessary to save her people, often at her own expense.

As far as characters go, Askia certainly had things going for her. She's bold, tenderhearted, brave. However, one of my main complaints is that she isn't all that... unique. Her voice is a bit stale - typical might be a better word for it. The tone is certainly YA, which doesn't bother me, but like lots of YA female characters, she's got a chip on her shoulder, has to manage several love interests, and as per usual, is beautiful. She is also full of self-doubt, and is in her own head much of the time. She fits the trope, and I would have liked to see something that wasn't so... tropish. My other complaint is the side characters - the prince, the queen, the king, Askia's friends, the politicians... I would have enjoyed it more if they were expanded upon. But since this story is told in first person, one of the downfalls is that we are only in Askia's head, and therefore side characters can be a bit challenging to flesh out.

My other complaint is the ending. I'm sure many people won't have a problem with it, or will be surprised by it, but I could see it coming from a mile away. It's certainly a cliff hanger in some ways, which I don't mind, but I will keep it spoiler free. That is to say, this was just personal preference. Most readers, I'm sure, will like it.

3.5/5 stars for me, and a for a debut author, I was impressed. If you enjoy political YA with a strong female lead, fun magic, typical and maybe not-so-typical romance, then grab this story.