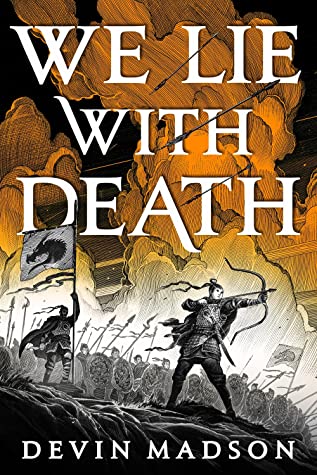 The first book in this series, We Ride the Storm, was on of my favorite reads in 2019. I eagerly looked forward to this follow-up, and it was everything I wanted it to be.

The story picks up almost immediately after the previous book ended. It follows the POV from the previous characters - Rah, Cassandra, and Miko - and adds a new POV with Dishiva, one of my personal favorite characters from the previous book. I was pleasantly surprised that we got a look into her world, and it expands the story in unique ways. Cassandra, however, still remains my favorite character. There are questions answered in this story that were left unanswered by the first book, and mysteries are revealed in utterly satisfying ways.

The characters remain a strong point in this author's writing. There voices are unique, so you always know who you are following. Their character arcs are well done. Miko is on the run, with no solid place to land and followed by her trusty general. She must find allies to help her win her empire back, but who can she trust? She tries to stay hidden from her enemies, and is joined by Rah through happenstance. Rah's character arc remains consistent. He is unwilling to change his Levanti ways, like his brother Gideon has, who has declared himself Emperor of the new combined Empire. Rah is unbending and brittle, stubbornly refusing to give up his identity, and it has far-reaching effects. There is something admirable about his stubbornness, though it does get him into trouble. Cassandra has been sold to a Witchdoctor, who performs experiments on her to try and learn all he can about She, who is living in Cassandra's body. Just who is this She? How expansive are Cassandra's dual souls? Who actually belongs in control of Cassandra's body? Who was there first? I must say, Cassandra's chapters remained my favorites, because time after time, Madson manages to make the unveiling of the mystery utterly captivating, dragging the reader along with some bread crumbs, and making each new reveal so satisfying. Dishiva has been made the head of Emperor Gideon's bodyguards. She's caught up in the political machinations of this new Empire, and is torn between her loyalty to Gideon and her loyalty to the old Levanti ways. Which will win out?

The worldbuilding is, much like the first book, spot on. The magic is unique, especially concerning Cassandra. And the interweaving of politics, cultures, action, moral dilemmas, interpersonal relationships, and character development once again left me in awe. Madson has created an immersive reader experience, one that you don't often find so seamlessly.

A huge 5/5 stars. Do yourself a favor and pick up this series. You won't be disappointed.