A Threat of Shadows (The Keeper Chronicles #1) by J.A. Andrews - book review 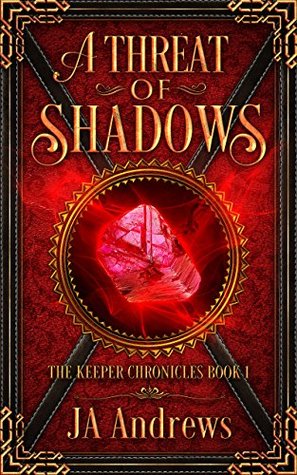 I was first introduced to J.A. Andrews when I read Dragon's Reach as a judge for SPFBO. I thoroughly enjoyed that book, and always had plans to dive into The Keeper Chronicles at some point. Well, that point has come. And I wasn't disappointed.

A Threat of Shadows follows the story of Alaric, desperate to find a cure for his wife, Evangeline, who has been bitten by a poisonous snake. Alaric is a Keeper, part of a group who are tasked with preserving the land's histories, and who use magic to do so. From the outset, I identified with his quest. His strong love for his wife is endearing, and Alaric has stopped at nothing to do everything he can for her. The story picks up with Alaric having already done things he regrets, and he has stepped away from his role as Keeper to the queen. He stood at her right hand, involved in the running of the kingdom, and the various political intrigues that naturally come with his role.

But now, it's been a year since he was at court. In the course of the first few chapters, Alaric joins a group of treasure seekers. Yet only he knows the treasure they seek; a stone, with memories hidden. And one of those memories is the antidote to the poison coursing through his wife. Among this group is a young man, an elf with strong magical powers, a dwarf, and a curious wizard. Andrews does interpersonal relationships between characters quite well, and this was one of the best parts of this book, too. The elf in particular was fascinating, funny, and an intriguing character. She is the last of her kind, and for unknown reasons has joined this band of treasure seekers. There is a hint of mystery to her, and the reader is drawn into her story.

The worldbuilding is quite good, although I wish it had been a bit more solid. Andrews' strong point is characters, so the worldbuilding seems to take a back seat at times. There are, however, terrifying beasts and even a dragon (yay!) that make the world more fascinating. At one point Alaric finds himself back at court, and the politics are well done.

The magic system was pretty typical, but I didn't mind. The magic users are drained of strength, as is often the case in fantasy settings, and are viewed with a healthy dose of fear and suspicion by the commonfolk. What I did find refreshing was the ability for users to keep their memories in unique Wellstones, therefore prolonging the histories of the world. I quite liked it.

All in all, A Threat of Shadows is well done, well written, and strong on characters. I plan on continuing this series in the future. 4/5 stars, and fans of epic fantasy with well-developed characters are sure to enjoy it.