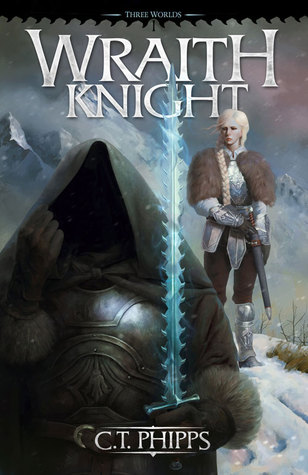 This audiobook grabbed my attention from the very beginning.

Let me start off by saying, audiobooks have only recently become something I enjoy. The experience is so very different than reading. However, this was a perfect book for audio format, for several different reasons. But enough, let's get to the good part.

This is my first introduction to CT Phipps, and I fully intend to read or listen to more of his works. Wraith Knight is hard to pin into one category. It's dark fantasy, mixed with some humor, mixed with some romance, and finally stirred all together into some conglomerate of epicness and adventure. From the get-go, the book drops you into the mind of a certain man who has no memory. This is a trope oft used, but not oft pulled off. However, I quite liked getting to experience the strangeness and confusion with the character (it is written in first person). Gradually, the character remembers he is Jacob Riverson, a legend turned Dark Lord by the Trickster, or, the King Below.

Jacob soon meets a woman named Regina who is in a battle to save her people. Jacob joins her, if nothing more than to prove to the Trickster he is his own man and can do what he wants (thank you very much). He is an endearing character, if not a bit annoying at times (I mean seriously, how many women is he going to fall in love with?) But for all his pining after females, Jacob soon proves he is more than some Dark Lord bent on destruction. And besides, not everything is as it would seem in this world Phipps has created. Is the enemy really the enemy? Is the light really the light? Who determines whether we are good or bad, anyway? The author dives into some deep questions of identity, heroism, and destiny, using a relentless plot and action scene after action scene with little time to breath. I flew through this book, and it was over before I knew it.

The worldbuilding was crafted into the story without being confusing. There were certain points where I wished the magic system was more defined, but that tends to be the case with books that are first in a series, especially with first person narration. After all, no character is going to think about particulars of magic or the world... they are a given.

The characters were well-written, and I really enjoyed the banter between them. It came across as realistic. They did, however, have a strange way of constantly making vows to each other of everlasting friendship and loyalty soon after meeting. But it had a Tolkien-esque feel to it, much like the author was giving a head nod to the classics.

A solid 4 of 5 stars for this dark fantasy. It took me back to my love for the classic fantasy tales, as well as adding new elements, such as first person narration, a non-typical romance, and rip-roaring battles and action.