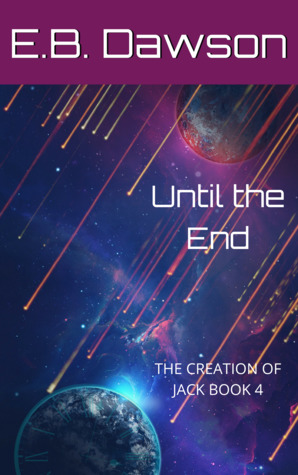 This series is fascinating. It follows the story of Logan (or Jack, hence the series name) as she grows and develops from a normal teenager to a half-robot, half -human assassin. I've reviewed the previous three books here, here, and here. The series tackles so many fascinating ideas: time travel, artificial intelligence, the balance of faith and science, the combination of humans and androids and the ethics of such a blend.

The plot of the whole series is really well done, following Jack's storyline interspersed with several tangent plots that make for a wild ride. I mean, who wouldn't be intrigued by wormholes that take you to alternating timelines where alien machines are trying to destroy humanity? The slow build of the series makes sense. The science behind it, the characters' journey's to this point, the complicated politics, all of it build to a climactic finish where Jack is forced to confront reality head-on... by herself, when reality as she knows it is being turned upside-down.

The character development in the series is nearly flawless. Jack is one of the most interesting, multi-layered characters I've ever encountered in indie sci-fi/fantasy. The side characters are well done, too. But the author doesn't stray too far from Jack being the center of the books, and I really like that. Her story is just too interesting to get sidetracked by another storyline. I'm not going to give anything away, since you should just go read the series, but the type of questions she is forced to confront is handled so well. Most of the issues are moral and ethical ones related to identity, scientific advancements and how far to take them, and what ultimately makes us human.

The writing style is my only complaint for the series. It vacillates between omniscient narrative (with a few instances of head hopping) and third person narrative. The latter is by far my preference. I feel like as a whole the omniscient narrative was largely unnecessary. And there were times where Jack's POV was a bit jarring because of it. This book in particular was hard for me, since she is blind and sees through a robotic wolf companion, but the writing is omniscient so you don't get the sense of what she is actually experiencing. However, the storyline is compelling enough that it's worth setting aside stylistic preferences.

As a whole, Until the End is a fitting name, and the book has moments of brilliance, interspersed with frustrating stylistic choices. If things like that tend not to bother you, I'd highly recommend this series for fans of science fiction that tackle deep topics, has complicated, interesting politics, and well-developed characters.