Symphony of the Wind (The Raincatcher's Ballad #1) by Steven McKinnon 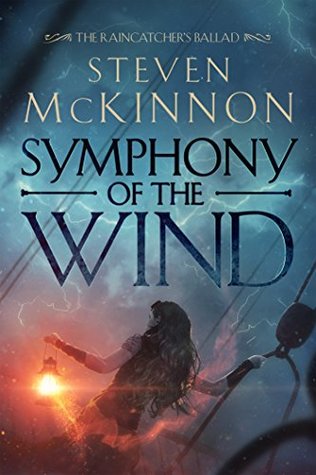 This story follows the tale of Gallows, a Hunter who gets caught up in a whirl of conspiracy, revenge, and just plain, flat-out rollicking bad luck. It also follows Serena, a young girl who isn’t what she seems and has powers she knows little about.

I’ll start with the things I really enjoyed. Interestingly enough, I feel it was the side characters who really shined. Damien, Pierro, and V (who we didn’t get to see much of and I wish there had been more) were among my favorites. They were unique and engaging. I also really appreciated the world-building. It’s a unique society, with hints of bigger-picture politics and intrigue and conspiracy, which I usually enjoy. This was no exception. There were surprising plotlines, the writing was engaging and humorous, and generally speaking, the action kept me on the edge of my seat.

A few things tripped me up, but not to a large degree. Serena was bland, in my opinion, and there were aspects of her character that felt inconsistent. She cares very little when someone in her orphanage is murdered, but then worries about a stranger she barely knows who goes missing. I enjoyed Gallows a bit more. I feel he was more consistent and believable, as well as more likable.

The plot could have used some streamlining. It was a bit haphazard, and there were points where I was thoroughly confused and didn’t know what was happening. It would come together, but then it would shoot out again in random directions. This left the climax rather disjointed, and I felt like there were five or six mini-climax points as opposed to the story leading somewhere concrete. This won’t bother everyone, however.

I can definitely see why many readers love this book. I enjoyed it, too, despite some of my complaints. All in all, if you are looking for something different and unique as far as themes, world-building, and atypical characters, then grab this one.

More in this category: The Raventree Society: Season One the Complete Collection by J.E. Purrazzi »