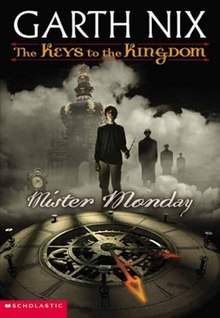 Mister Monday is the first installment in Garth Nix’s series The Keys to the Kingdom and is one of my favorite childhood reads. The story follows young Arthur Penhaligon in his quest to solve the mystery revolving around an enigmatic House only he can see and the strange denizens dwelling within.

Being one of many young children forbidden to read the Harry Potter books, I sought out other fantasy series to stoke the fires of my imagination and no series was more beloved by me than Garth Nix’s The Keys to the Kingdom, which came out like clockwork starting in 2003. In fact, it led me to the incorrect assumption that I could expect a professional author to churn out a new book once a year. Even having that incorrect assumption, however, didn’t help as I lived next door to my library and I would check every single day for the next installment.

Revisiting the series as an adult, reading it aloud to my 6 year old son, I tried to lower my expectations. It had been years since I finished the final book Lord Sunday, and I was certain it wouldn’t hold the same magic it had for me in my youth.

I quickly discovered I was mistaken.

Although, I viewed the prose more critically, I found myself as lost in the character and story as I did in my youth, and Jacob was equally enamored. The world is delightful, blending the real world with an almost Alice in Wonderland style other world which converges with our own.

Arthur, a young asthmatic boy on the verge of death, is granted an object of power he can’t fully comprehend and can’t let go off lest he breathe his last. This key, the minute hand of a clock and lesser half of Mister Monday’s key to the kingdom, provides Arthur’s connection to life, the mysterious House, and his destiny as the Rightful Heir of the Architect (the Creator of everything). But before he can accomplish anything, he will need the help of Part 1 (of 7) of the Will of the Architect and a young girl out of time named Suzy Turquoise Blue.

In this story, Nix effortlessly blends different myths and creatures together to form a truly unique experience to form something akin to Chronicles of Narnia with a hard lean into urban fantasy. Upon completion, Jacob and I jumped right into Grim Tuesday and are now on Lady Friday. The reoccurring use of the number seven also plays a part in the world as the days of the week also exemplify one of the seven deadly sins.

There’s a lot to unpack in his series for youngsters.

I would happily recommend this series to anyone who is interested in plunging into fantasy (especially parents who would like to initiate their kiddos to the genre). Content is pretty suitable for younger (pre-reading age kids as well) although there are some scarier creatures and violence in later books.

So check it out, gentle reader, and let me know what you think.