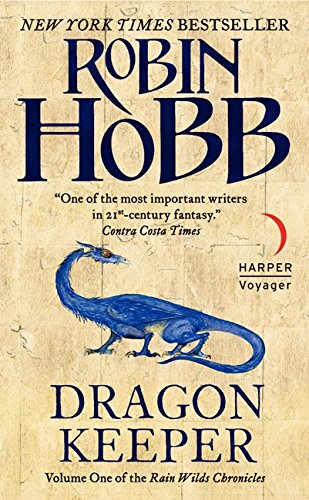 Taking place several years after the events in Ship of Destiny, the trader families in the Rainwilds have grown weary of caring for the stunted and malformed dragons that emerged from their cocoons. They have forgotten their promises to the dragon Tintaglia and now search for a way to rid themselves of their responsibility by shipping the dragons off the legendary Elderling city Kelsingra. Little do they know, this adventure is desired equally by those very same dragons who have grown equally tired of the Rainwilders.

Amongst those tasked with caring for the fledgling dragons is Thymara, a young girl touched by the Rainwilds, Alise, an Elderling scholar and wife of the world’s worst person, Sedric, Alise’s lifelong friend and her husband’s assistant, and Leftrin, captain of the oldest liveship Tarman. Together they will brave the toxic Rainwild River in search of a city that may no longer exist, experiencing hardships, heartbreak, joy, triumph, and loss along the way.

Unlike the Fitz-centric stories, Dragon Keeper is a more traditional fantasy story, employing multiple-POVs and told in third person, and although it features cameo appearances of Liveship Traders characters, it is a fresh story told from new perspectives. After the emotional journey of the Tawny Man Trilogy, I found the change refreshing and engaging as it expanded the world and began to build on some of the mythology already established. The way Hobb reveals and explores new corners of her world is really quite astounding, and while this was my least favorite of the ten books so far, I think that is only because I love the other nine so much. With lower stakes than previous books and more steady pace, Dragon Keeper sets the tone for the rest of the adventure and in some ways reminded me of an odd combination of The Hobbit and Lord of the Flies with a dash of Pride and Prejudice as a group of young people go on a sort of treasure hunt while trying to figure out what rules of civilization still apply to them.

While I would love to recommend this to every fantasy reader, I will say you really need to have read the other nine books in The Realm of the Elderlings, which I admit are not for everyone. The series does include some more adult content and situations, and while they are not super dark I would rate them somewhere between TV-14 and MA depending on the book. If you enjoy character driven tales with a truly magnificent magic system, an ever expanding world unlike anything else, and a colorful world of intrigue, trade, and dragons, this is the series for you. Start at Assassin’s Apprentice and find your way to the Rainwilds. It will absolutely be worth your time, gentle reader.