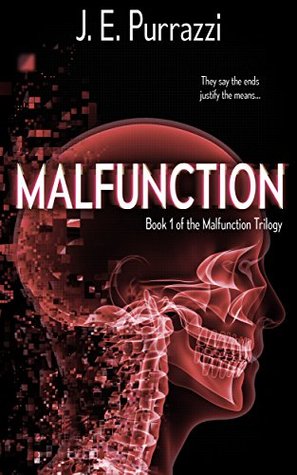 You know the feeling you get when you read something so deeply profound you leave wondering if you will ever be the same?

I'm not being melodramatic, here. Really, I'm not. Malfunction crosses the sci/fi, dystopian genres - it has the feel of Wool  but the entertainment of Red Rising, and manages to address themes in a deeper way than either of those previously mentioned books (IMO, that is).

I previously reviewed Revelation, which is the prequel novella to this book. However, they don't have to be read in order to be enjoyed. In fact, I'd almost suggest starting here with Malfunction and then reading Revelation. However you decide to do it, you won't be disappointed.

Malfunction follows three characters - Menrva, a  brilliant geneticist with a fractured past; Cowl, a hilarious, foul-mouthed manchild with a soft heart, and Bas, a teddy-bear human/cyborg who will tear out your heart and then put it back together again. The setting is this: the world has been invaded by huge aliens that can communicate telepathically with each other, and they destroyed said world. Now, humanity survives in Bunker, which is ruled by a dictator/savior, who has the military under his thumb and a plan for the survival of humanity. His name is Pope, and is a very clever, very understandable villain (and so very relatable - making him perfect for this story. Props to Purrazzi for being so dang smart with her character choices).

Cowl stumbles across a secret - the Tournaments that are held each year are real. They aren't just playing video games - they are really controlling living, breathing soldiers who go aboveground to fight the aliens. They are dealing with real lives. What is a manchild to do? Well, for Cowl, the decision is easy. When he finds Bas broken, alone, and hurt, he takes him to Menrva, a childhood friend and crush he still pines after. Thus commences a race to keep Bas safe from those who would harm him, while staying alive long enough to figure out what the right thing to do is. And for each character, Purrazzi weaves believable motives, gut-wrenching decisions, fast-paced adventure, and a tale that will leave you begging for more.

Through it all, the author hints at the ultimate question: Do the ends justify the means? Is saving humanity worth paying the ultimate price? After all, what really makes us human? And if what makes us human is simply blood and bone, is that worth sacrificing morality, justice, and autonomy to save? The way she deals with it is haunting, powerful, and beautiful. My one complaint is the romance aspect: I feel it was rushed, and wish it had been more satisfying. But it's a minor complaint, and didn't diminish my enjoyment of this fantastic story.

Do yourselves a favor and go dive into this series. And let me know - are you team Bas, or team Cowl? And really, does one have to choose? I refuse to choose.

More in this category: « Along the Razor's Edge (The War Eternal #1) by Rob J. Hayes - Book review Coyote Summer by Laura Koerber »