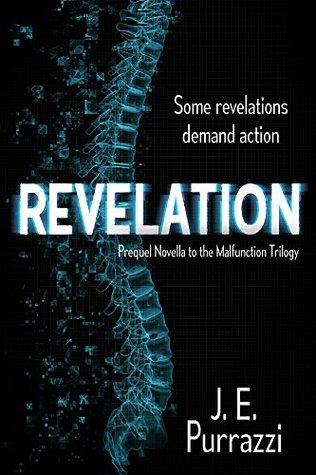 JE Purrazzi does dystopian fiction well. I’ve already reviewed some of her psychological thriller/horror stories (it’s quite a cool format, too) so I thought I’d pump out some reviews for the main body of her works. The Malfunction Universe is interesting. The world has been destroyed by a species called the Wreckers, an alien race that is fueled by the simple animal-nature that drives them – to conquer. They communicate telepathically, which is curious, and the way Purrazzi writes it, you feel like you really do understand them.

Revelation is the prequel novella to the larger series. It follows the story of Cowl (who, by the way, is hilarious), a tech genius who’s haunted by the loss of his brother. He stumbles upon a government secret: the popular “video” game played in Tournaments is actually real. The players control real, living genetically-engineered cyborgs who fight above the surface against the Wreckers. Insert moral dilemma for carefree, doesntgiveashit Cowl. What is he to do with information? Can he just walk away?

The problem for Cowl is that this information comes with a face to go with it: Bas, a giant, lovable, mess of a man/cyborg who somehow escaped from those who held him captive and made him participate in these “games”.

Purrazzi makes you think with this story. She tries to tackle some heavy themes: free will, self-determination, identity, and ultimately: what makes us human?

This story is sure to hit well with fans of dystopian, science fiction, and apocalyptic fans who enjoy well-written characters, fast-paced writing, humor, and fascinating technology.

More in this category: « This Pain Inside by Hannah Heath - A short story book review The Dispatcher by John Scalzi - Audiobook review »