Sins of Empire (Gods of Blood and Powder #1) 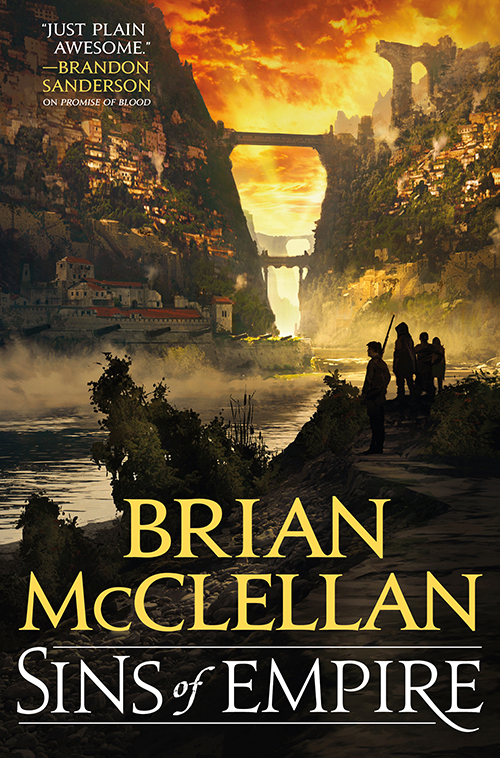 Sins of Empire is, undoubtedly, the undisputed high point of McClellan's career so far.

Colonel Ben Styke, a decorated war hero of the Fatrastan's war for independence, has been convicted and imprisoned for the past ten years as a war criminal.
Silver Rose Michel Brevis, a governmental spy of Fatrasta, is tasked with the duties of a detective, a job with a required set of skills that he doesn't possess.
Lady Vlora Flint, a General and co-owner of a mercenary company called 'Rifle Jackets', is under contract with the Governor of Fatrasta.
None of them knows each other, and their lifes are set on paths that aren't meant to cross. At least not until a professor locates and excavates an ancient artifact of the utmost importance; a legendary Godstone. What, you will ask me, is a goddamn Godstone? Well, what does it sound like it is?

"Priviled!"
Robson turned to find that the old professor had caugh up.
"Priviled," Cressel wheezed. "What's happening? Are you all right?"
"Yes, yes, I'm fine." Robson waved him off and began striding back toward the camp. Cressel fell in beside him.
"But, sir, you look like you've seen a ghost!"
Robson considered the brief vision, his brow furrowing as he let it hand in his mind for a few moments. "No," he sad. "Not a ghost. I've seen God."

A couple of months ago I was discussing with a friend about the success of Brian's first trilogy, and whether he can follow up on it or not, with Gods of Blood and Powder. Brian's talent was of course unmistakable, but I didn't think possible that he could once more create characters as powerful as Taniel and Tamas. Starting the book, I thought I was right. I was disappointed to find Vlora with a POV (a character I disliked from the first trilogy), and Michel seemed like a poor imitation of Adamat. Guess what - never in my life have I been so wrong. All main protagonists, including Ben Styke, proved to be some of the most complex and compelling characters I've ever had the joy to read about.

Sins of Empire is set in the same universe as the first trilogy, but in a different continent and time period (approximately ten years after the events of Powder Mage). McClellan was very careful with the re-introduction of the world and magic system, allowing new readers to fully comprehend the various machinations, and keeping his old fans interested without boring them with unnecessary repetitions.

The plot is intriguing and mind-capturing from the very first pages (the prologue, to be exact). The prose is smooth as silk, and the narrative unfolds at a quick pace. All in all, Sins of Empire is one of the best examples of modern fantasy fiction, and the start of a new trilogy whose success is already ensured.