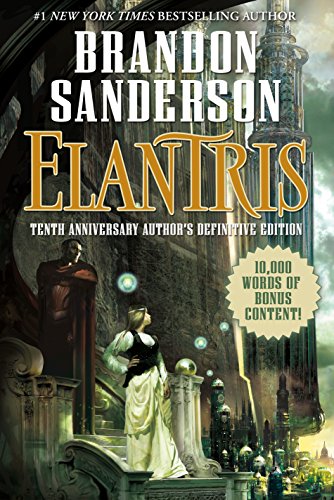 I began my journey in the Cosmere (Brandon Sanderson’s connected universe of fantasy and magic) three years ago when I picked up the Way of Kings on something of a drunken whim. I devoured it in a matter of days and moved on to Words of Radiance and Edgedancer before waiting with bated breath for Oathbringer that same year. I’ve since moved backwards(ish) through the Cosmere, reading both Mistborn trilogies and a bunch of short stories only now finally getting to the book that started it all—Sanderson’s debut Elantris.

Elantris tells the tale of its titular city, the fallen capital of Arelon. It once stood as the pinnacle of art, culture, and magic. It was the city of gods, populated with men and women who glowed with an internal light and whose hair shown like platinum. Furthermore, the magic that transformed ordinary people into these godlike begins could strike at random. That is, until the magic failed…and those taken by the mysterious Shaod became walking corpses, ultimately driven insane by their accumulating injuries. Our story begins when the Shaod strikes an unlikely target, Raoden the crowned prince of Kae, and we follow his story as he cleans away the slime in an attempt to right what’s gone wrong.

Elantris concerns itself with two other main point of view characters: Sarene, Raoden’s betrothed who arrives too late to meet him but at the right time to save the kingdom, and Hrathen, a Derethi priest hell-bent on converting Kae to his religion in order to prevent his theocratic government from wiping them out.

Like with every Sanderson book I’ve read, he does an excellent job of making you care about his characters almost immediately. All three POV characters are understandable and relatable. Sure, their decision can be frustrating but that just makes for a more satisfying conclusion. Similarly, the magic system is pretty great even if runic air-drawing feels a little simple compared to Metallurgy or Stormlight. It’s more the history and mystery surrounding the magic’s failure that makes it so interesting.

I will say that this was the least of his books for me, which makes me almost wish I started here. You can see all of the hallmarks of his work, but with less of the refinement. The first twenty to thirty percent of the book drags as the world is built, and it took my multiple tries before I finally got to the take-off point. Mind you, when it finally does get rolling, it does so QUICKLY. It’s also nice that the reader isn’t given chapters of magic school lecturing, which was my only real nitpick with The Final Empire.

If you’re new to Brandon Sanderson and you’re looking for a launching off point, this is it. You’ll get a taste of his style along with the knowledge that things only get better. And if this isn’t for you, check out Mistborn or the Way of Kings. Knowing that this was connected to the Cosmere really helped propel me through the first twenty-five percent. Read those and then try coming back. It’s worth it. It’s all so worth it.

More in this category: « The Slow Regard of Silent Things by Patrick Rothfuss - Book Review A Little Hatred (The Age of Madness #1) by Joe Abercrombie - Book Review »