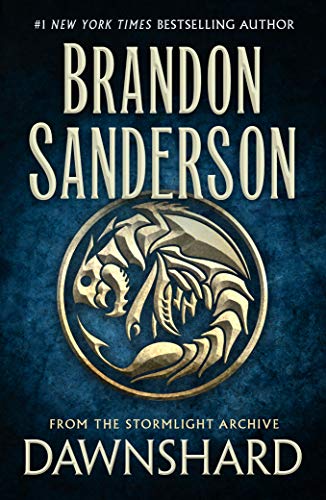 Taking place between Oathbringer and Rhythm of War, Dawnshard tells the story of Rysn Ftori, a merchant trader last seen in the Oathbringer interludes as she sets sail for the mysterious ancestral island home of her pet larkin Chiri-Chiri. Along with her on the expedition is everyone’s favorite member of Windrunner Lopen (did you think I was going to say Kaladin?) and an assortment of others sent by Navani Kholin to investigate this strange land that drains the stormlight from any Radiant that draws near.

Dawnshard is everything fans of Sanderson have come to expect. Relatable characters, an intricately built world, and a complex magic system. Despite being thousands of pages into the series, he manages to illuminate old mysteries while raising new questions which beg to be answered. The growth we see in both Rysn, who in Oathbringer lost the use of her legs, and Lopen, a certifiable lovable jackass who unintentionally hurts his friends, is lovely to witness and really makes this yet another memorable part of the Cosmere.

For fans wishing to experience the full breadth of Roshar, Dawnshard is an essential chapter in the grand adventure that is the Stormlight Archive, and like the secret government created writing machine that he is, Sanderson just keeps cranking them out.

More in this category: « Piranesi by Susanna Clarke - Book Review Rhythm of War by Brandon Sanderson (Book 4 of the Stormlight Archive) - Book Review »