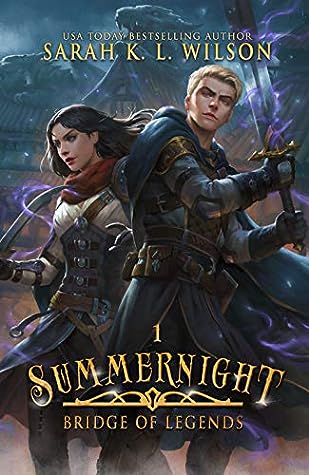 This book has much to commend. The magic system is quite unique and the writing fast-paced. Summernight reads as dark YA, and is sure to please fans in the YA genre who don't mind blood, gore, and tough themes.

Tamerlan has just five days to save his sister from death. Every Summernight, at the end of a five day festival where party-goers dress as the infamous Legends, a Lady Sacrifice is killed to appease the dragon their city rests upon. Tamerlan catches a glimpse of this years' sacrifice, and he sees his sister, Amaryllis, being carted off as the sacrifice.

Merielle is a Scenter, a part of the Watch who are tasked with upholding the law and peace in the city. She can scent emotions and intent, but cannot see in color. Instead, she smells in color. A chance encounter with Tamerlan leaves her disoriented, instantly attracted to him through his scent.

The story takes place over just five days, and therefore I found I wasn't connecting with the characters quite like I would have wanted to. This did detract somewhat from my overall enjoyment of the book, but the magic system made up for it.

Tamerlan comes across a secret page from a book detailing how to access the Bridge of Legends. Essentially, a concoction of herbs is mixed together and smoked, opening a portal to the Legends who can then take over his body. He needs their help - and their set of skills - to try to rescue his sister. But he can't control which Legend overtakes him. First is Lila Cherrylocks, master thief, who takes him on a joyride through the city to steal and generally show off her skills. But she disappears before she can be much help to him. The next Legend is Byron Bronzebow, whose sense of justice at first seems perfect for rescuing his sister. But this Legend is distracted by injustice everywhere, and soon he, too, disappears before he is any real help. The next Legend to overtake him is Maid Chaos, and this is where the magic, and story, takes a very dark turn. Tamerlan goes through a killing rampage in the city, his (or, more accurately, the Maid's) only intent to create as much havoc as possible. Tamerlan is heartbroken over his actions, and this means he only Summernight left to rescue Amaryllis.

Merielle is tracking Tamerlan through it all, and catches him on the night of Bronzebow, knowing he was the one who stole throughout the night he was Cherrylocks. He pleads with her to let him go, so he can rescue his sister. Merielle is torn, because she has a strong sense of the law, but also is exceedingly attracted to Tamerlan and his plea. She lets him go, and then he goes on the killing rampage as Maid Chaos. Merielle can Scent something else is going on underneath the surface, for she can smell the magic permeating what Tam is doing. She also knows that she herself also fits the bill to be the Lady Sacrifice. She is, after all, also Dragonblooded, part of the race of people who meet the criteria to satisfy the dragon and keep him slumbering.

Thus we come to the Summernight. Let's just say, it is a bit predictable what happens, but was also quite satisfying. We see a slumbering dragon awake and tear the city apart. Tam and Merielle, along with their friend Jhinn, barely make it out alive. And then the story ends.

Generally, I quite enjoyed this book. I've been enjoying a bit of dark YA recently. The writing is crisp, and save for a few grammatical errors, is easy to read. There were a few sticking points for me, the first being character development. But as seeing this is a series, this is most likely rectified as the story progresses. I also was a bit confused by the ending. Amaryllis does not, in fact, end up being the Sacrifice, and this isn't explained at all. How was Tamerlan so wrong? He saw his sister. And then, it wasn't her.

I really enjoyed the magic, which was very unique. And the story was fast-paced, lending for a quick read. 3.5/5 stars for me. I'll be delving into the rest of the series, more than likely.

More in this category: « Dragon Mage (Rivenworld #1) by ML Spencer - book review The Fires of Vengeance (The Burning #2) by Evan Winter - audiobook review »