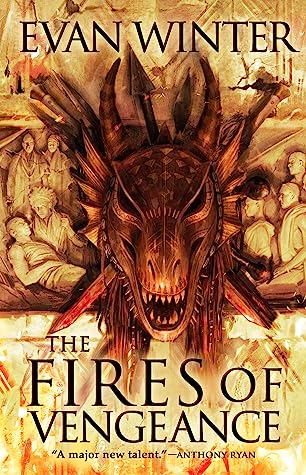 This is a worthy follow-up to the hit debut, Rage of Dragons, by exciting new author Evan Winter. It picks up right where Rage of Dragons lets off. Tau is now Champion to Queen Tsiora, and his ragtag band of friends are forming into a formidable defense, with Hadith being made into grand general because of his brilliant military mind. But not all is as it would seem. Demons are haunting Tau in the daylight, dragged from the mists of Isiogo. But Tau can't trust his own mind. Are they real? Or can demons really haunt and kill in the land of the living?

Tau and his queen face an impressive host of problems. First, Tsiora's sister Essie has been propped up by the nobles as the real queen. She has taken over the capital city, and Tau and Tsiora will be hard pressed to get it back. They have the Zidine to contend with, not just the armies of the nobles. And blood will flow as Tau continues to seek vengeance on the one who killed his father, and the one who stands at Essie's side: Abasi Odili.

Tau will stop at nothing to quench his thirst for revenge. But what will it cost him? His sanity? His life? He makes Queen Tsiora promise him that vengeance will be his if he wins back her city. And with Tsiora falling for Tau, she can't say no.

I was completely enraptured listening to his audio. The characters jumped out and grabbed me, from their snarky friendships forged into brotherhood bonds, to the slow-burn romance between Tsiora and Tau.

One of the things that was especially difficult, although not in a bad way, was to see just how far Tau was willing to go to seek his revenge. He makes heart-rending sacrifices, including losing a part of his sanity, to losing his family - all except his mother - as the consequences of his choices catches up with him. This is a heavy theme throughout this book. Actions have consequences, not just for us, but also for those around us. Sometimes those we love get caught in the crossfire.

Winter's continues to delve into themes of friendship and loyalty. He weaves a story full of blood, battles, war, betrayal, love, and redemption. You feel as if you are really there, for the voice talent of Prentice Oneyami is almost unparalleled.

My one quibble with this story is that it is almost too much like Rage of Dragons, from the setting and worldbuilding to the character development. I would have liked to see the characters grow a bit more, but Tau seems stuck and stagnant, so narrowly focused on revenge that he makes little growth. It DOES fit the story, however, and it's just personal preference.

4/5 burning stars for this follow-up story. I eagerly look forward to book 3.

More in this category: « Summernight (Bridge of Legends #1) by Sarah K.L. Wilson - book review The Shadow of the Gods (The Bloodsworn Saga, #1) by John Gwynne - book review »