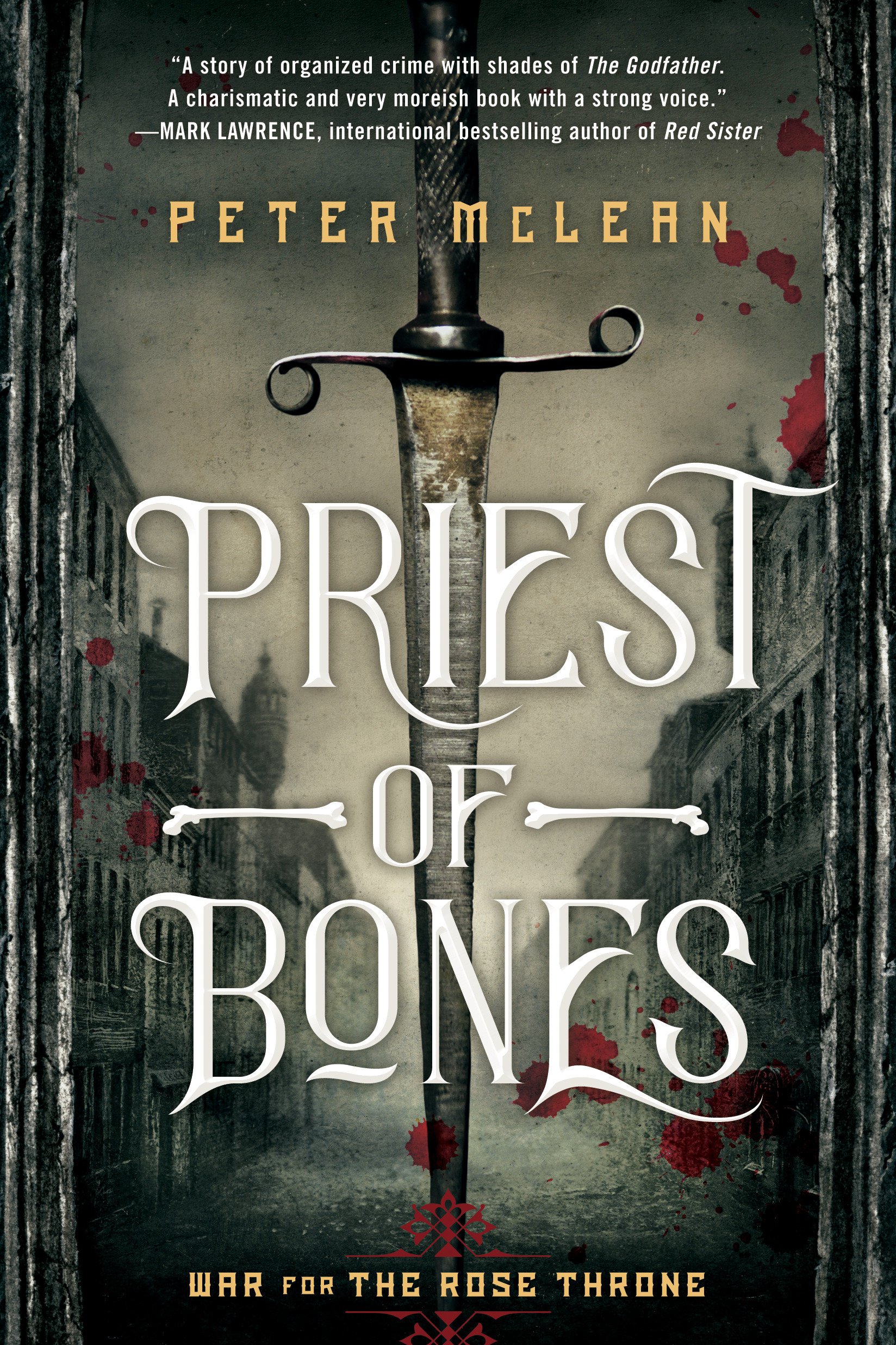 I have never watched Peaky Blinders. Therefore, the comparison to the TV series starring Cillian Murphy was lost on me. After reading Priest of Bones by Peter McLean though, I’m thinking maybe I should check it out because this is a damn fine book.

For those of you like me who have never seen Peaky Blinders, Priest of Bones felt like the Godfather meets the Warriors if it was set in Edwardian(ish) England and written by a particularly pissed off Mark Lawrence.

The story follows Tomas Piety, a gangster turned priest of Our Lady of Eternal Sorrows, as he returns to his hometown from a bloody war. While he was off serving queen and country, his aunt was supposed to be guarding his criminal empire. She did not. With little else to do, Tomas sets about reclaiming his lost territory with the help of his gang, the Pious Men. The gang features a number of interesting and aptly named characters, including Jochan Piety, Bloody Anne, Billy the Boy, Fat Luka, Sir Eland, Will the Woman (later Wencher), and Cutter. Each character is dubbed accordingly for their reputation either in the war or on the streets. A helpful Dramatis Personae is featured before the story as a swift introduction to the cast.

Tomas’ quest to rebuild his empire and protect his town is complicated when he is conscripted/blackmailed/threatened into the service of a spy working for the queen. Their goals align for the most part, but it is clear who pulls the strings. In this way, Tomas, despite controlling his own people, feels propelled forward by machinations we can’t quite see yet. Which brings me to my one true complaint: Priest of Bones doesn’t quite feel like a complete story. As I finished the last page, I turned it back and forth hoping for another chapter or an epilogue that would give me a deeper sense of conclusion. There wasn’t one. In this way, it is very much part of a trilogy, to its slight detriment in my mind. I can easily imagine all three books as part of an omnibus. But that is a personal preference, and other readers might not mind.

McLean’s prose is much like his protagonist Tomas Piety: lean, mean, and sharp. There is nothing extraneous here, and that is very much to my liking. I was reminded of Mark Lawrence, as I have written, but also of Ed McDonald. The storytelling serves McLean and Piety well as Tomas’ personality drips from the page. The reader gets swept away by the stream of thought and rush of emotion. Even before some of Tomas’ past is revealed, you feel the weight of his burden.

Readers beware: Priest of Bones is chock full of bloody violence, hard language, and a few rage-inducing moments. As a father of two young sons, I found it difficult to get through a brief section toward the end. McLean handles the sexual violence well as there is nothing on page, but regardless I feel compelled to warn you. The reader will seethe with Tomas’ anger.

In conclusion, Priest of Bones is lean and sharp, a story worth telling and reading. It proves a great alternative to standard fantasy fare while also offering enough forward momentum to propel the reader onto the next page, chapter, and book. I can’t wait to read the next one.

More in this category: « The Rage of Dragons (The Burning #1) by Evan Winter - Book Review Norse Mythology by Neil Gaiman - Book Review »