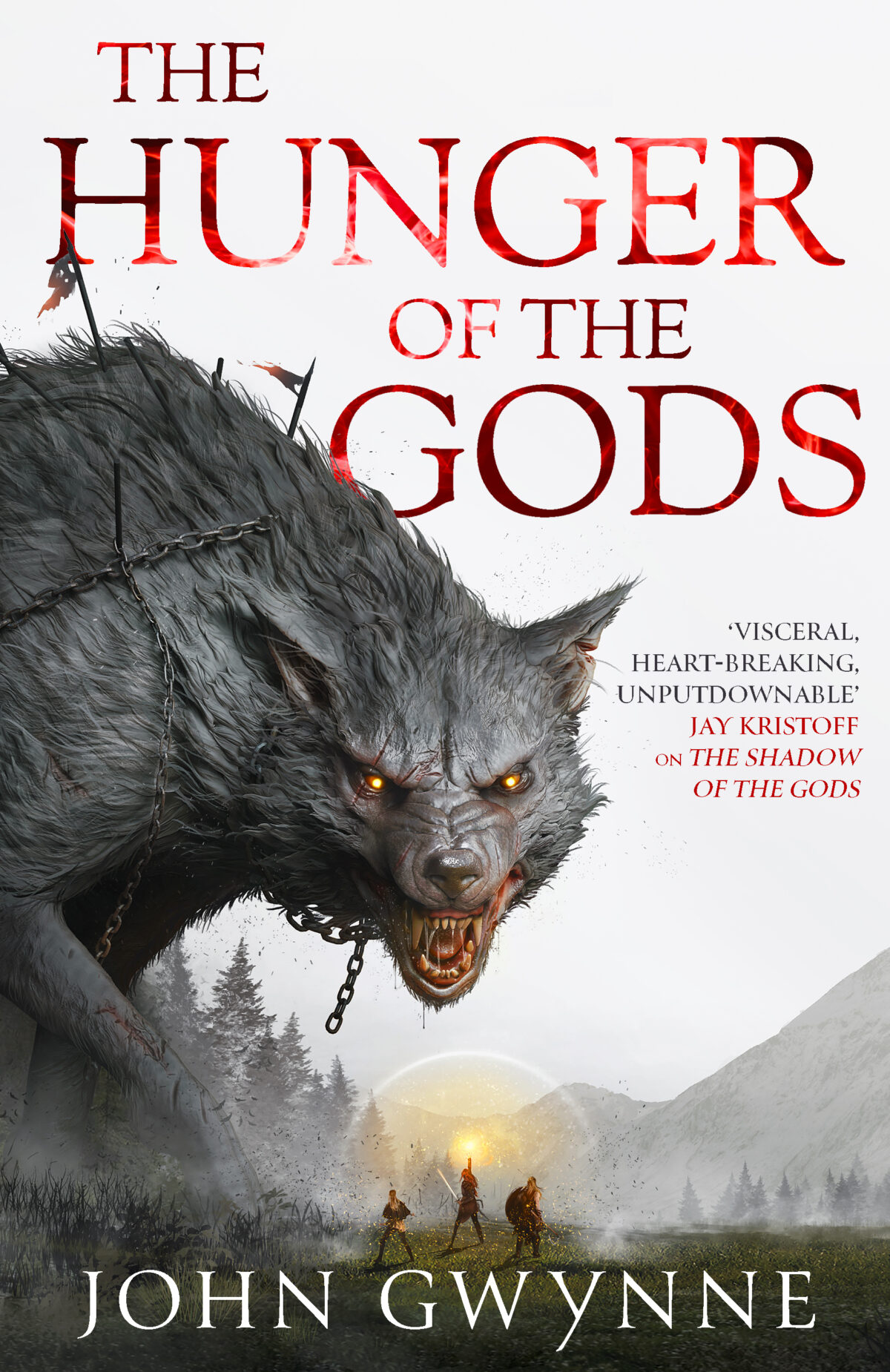 I read a digital copy of this book which I was granted by Orbit Books, through NetGalley. Thank you very much to both parties and the author, John Gwynne!

I had been very much looking forward to continuing this Norse inspired saga and was not disappointed. There is a handy recap included at the beginning of the book, which I found very useful to remind myself of who the main characters were, it having been a year since I read the Shadow of the Gods. The maps were also a helpful addition - the characters do a lot of travelling across Vigrid in this story of mythical shape-shifting gods, fantastic creatures and saga legends. There are also many Norse terms peppered throughout the narrative so the glossary of terms was useful too.

This sequel to The Shadow of the Gods begins where Book 1 left off, after the dragon god, Lik Rifa has been resurrected and is leading her ‘children’, the dragonborn Raven Feeders back to her home, from where they hope to reassert their dominance across the land of Vigrid.

Times have changed since the Fall of the Gods, and Vigrid has become an uncompromising world that treats the descendants of gods as thralls and refers to them as ‘Tainted’. Lik Rifa hopes to turn this around and restore the respect her descendants deserve.

The story has expanded dramatically and so too has the cast of characters. We have the Bloodsworn, the Battle-Grim and now also the Raven Feeders, each band of warriors with its own agenda to fulfill. Queen Helka, her son Hakon and her retinue play a larger part, and also Prince Jaromir of Iskidan. New POV characters within the Raven Feeders and Queen Helka’s company enable us to keep up with these groups and add more rich layers to this epic story.

The Raven Feeders are fiercely loyal to their dragon god, who they resurrected using magic gained from Rotta the dead rat god’s spell book. The Battle Grim resurrect Ulfrir the wolf god (not really a spoiler if you have seen the book’s cover!) and are keeping him in thrall to them - hoping he will help them beat the dragon god when they manage to catch up to the Raven Feeders.

As I mentioned, there are more point of view characters in this book than its predecessor, but the original three Elvar, Orka and Varg, still remain.

Elvar of the Battle-Grim, along with Sighvat and Grend have sworn a blood oath to Uspa the seidr witch to help get her son Bjarn back from the Raven Feeders. To do so they must take on not only the fearsome Raven Feeders but the awe-inspiring dragon god as well.  They expect the wolf god, Ulfrir, to help them. Skuld, daughter of Ulfrir is now also thrall to Elvar. She and her sisters were guarding the dragon for 500 years in her underground prison.

Orka Skullsplitter is still on a mission to find her son Breca who was also captured by the Raven Feeders. She was once again my favourite character, driven entirely by vengeance and the most badass warrior around. She also has an endearing, warm motherly side to her in the way she deals with Lif and other allies she encounters, but gods forbid you should get on her bad side, or the wolf within her will rip your face off. She rejoins the Bloodsworn whose leader she once was and who are shocked to discover that she is still alive.

Varg is now a valued member of the Bloodsworn. His days as a thrall are long behind him, but he is still seeking vengeance for his sister’s maltreatment by the slave traders she was sold to. He also hopes to one day track her down and save her.

The world building is also expanded in this sequel, with many more territories traversed and described in wonderful detail as the warrior bands travel far and wide across Vigrid. I particularly enjoyed the magical Galdur Tower which is Skalk’s domain - filled with amazing and horrifying creatures.

The pace of this novel was fairly slow to begin with. There were a lot of travel sequences interspersed with some fantastic action scenes - John Gwynne’s wealth of expert knowledge when it comes to blood-thirsty fighting with swords and other medieval-type weapons was made use of time and again. However things did not really take off completely until two thirds of the way through the book for me. At that point the pace picked up and became much more intense, ramping right up towards the end as the parties all became nearer to their individual goals and various characters’ paths crossed. We are clearly being lead towards an explosive conclusion in the next book which will be the final chapter in the Bloodsworn saga.

Sue is British, living in Massachussetts since 2003. A Mum of two teens, she enjoys fantasy, SciFi, dystopian, thrillers, occasional historical fiction in both YA and adult genres. She wrote her grandad's life story during 2020 and has a couple of ideas for other books. You can find my reviews by Sue at suelbavey.wordpress.com.