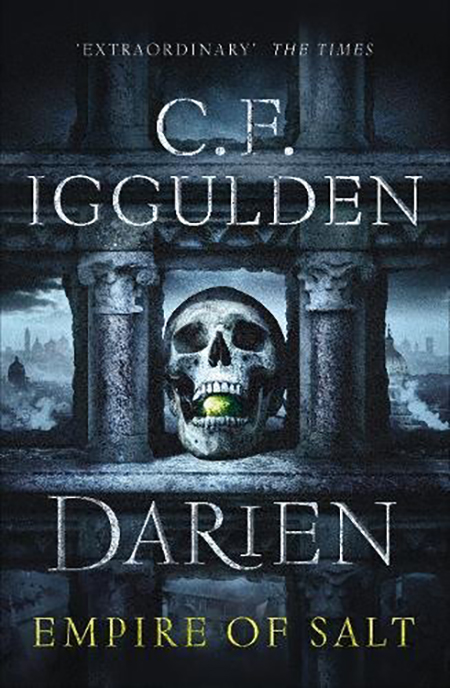 Conn Iggulden is one of the greatest Historical Fiction authors of our times. Apparently he's damn good at Fantasy as well.

Darien, a city that is home to over a quarter of a million citizens, is the result of the fall of the mighty Empire of Salt, one of the greatest empires this world has ever seen. It is ruled by a puppet monarch whose strings are pulled by twelve aristocratic families; families that keep the order and preserve the peace. But when a bunch of mercenaries are hired to murder the King, everything will go to hell... or even further.

"Deeds sighed suddenly, so tired then that he could barely stand. Perhaps it was time to stop struggling. He recalled there had been some ancient fellow forced to carry his own cross to where they crucified him. The thought was in his mind from before, when he'd felt like an apostle. Deeds though he might resemble the man with the cross then."

Iggulden has done a great job on his first fantasy novel. He established a wonderful world with its own history and mythos, giving you glimpses of the past, expanding and exploring it with a steady pace. His magic system was well-thought-out and balanced, playing a significant role in the story but leaving enough space for other aspects to work.

The story itself was intriguing from the beginning, and it was told from 5 different points of view. There were a lot of important sub-plots that played a vital role in the main story-line, and all of them were masterfully intertwined.  All of the aforementioned aspects were fundamental attributes to Darien, but the most crucial one was the characters. Iggulden purred all of his talent into creating a bunch of well-sculptured and memorable characters that fell and felt for.

All in all, Darien is a well-written and intriguing novel, with enough machinations, conspiracies and controversies to rival A Game of Thrones.

More in this category: « Blackwing (Raven's Mark #1) Age of Assassins (The Wounded Kingdom #1) »