The Queen of Blood (Queens of Renthia, #1) by Sarah Beth Durst - book review 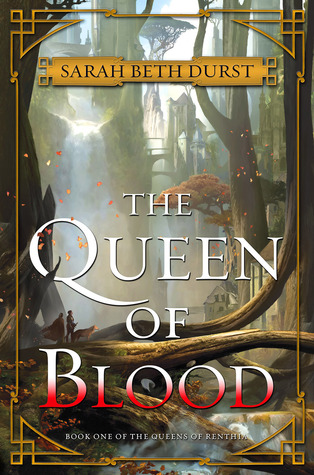 This book caught me by surprise. When I first picked it up, I didn't realize it was YA. But it takes dark turns throughout the story, so I'd probably classify it as dark YA, and it had me hooked.

Every child raised in Renthia knows this rhyme by heart. Everything has a spirit, and every spirit has one goal - kill and destroy humankind. The Queen is the only one powerful enough to keep the spirits in balance, yet strange things are happening. The spirits are starting to destroy, so what does this mean for the people of Renthia? Is the Queen losing her power?

Aratay is a queendom built in the trees. At first, I wasn't so sure about this, since I was having a hard time picturing entire villages atop forest trees. But as the book went on, I loved it more and more. It was unique, for starters. I hadn't read anything quite like it. There is a system of lines and pulleys and hooks that lets you travel faster through the trees and villages, much like flying. It had a Tarzan type of feel to it.

The story centers around Daleina, a teenager who awakens one day to an attack by the spirits on her village. She is able to protect her family by controlling the spirits and forcing them to leave, which she is only able to do with a modicum of strength. As a magic user, she has barely enough strength to be considered a hedgewitch, which every village or town has, someone who, like the name suggests, can protect the village to some small extent, and dabbles in herbs and potions. Daleina draws the attention of a Champion, Ven, and finds herself sent to an Academy to see if she can become an Heir. Each Heir awaits the death of the Queen, to see who will be chosen by the spirits to take her place. It's a rather intense training ground, where they are tested to their limits to see who is the most powerful, and therefore who is the most likely to keep the spirits in balance.

From the outset, I was intrigued by this unique magic system. The spirits are everywhere, biding their time, trying to stir up mischief. Some spirits are small and nearly harmless, while others are huge and malevolent. Daleina, since she isn't very powerful, much work twice as hard as everyone else at the Academy to learn how to control the spirits. Ven chooses her as his student, and she is taken from the Academy to learn how to apply her magic in the real world. Things don't go as planned, and sooner than she would have liked, she is then taken to the capital city to go through a series of tests that each Heir must partake in. What makes Daleina unique is not that she tries to control the spirits as everyone else does, but she uses subtle distraction to convince the spirits that really what they want to do is something completely different than just destroy. For example, she often convinces wind spirits that they want to dance and play. It gives her an edge that no one else has, although her lack of strength would typically make her a cast-off for the Heir competition.

As the story progresses, it becomes clear the current Queen has become corrupted, and is putting the entire nation in jeopardy. Ven and Daleina must put a stop to it - by killing the Queen. However, the death of the Queen will throw the balance, and the spirits will go on a rampage, unchecked by her balancing power. It makes for a very compelling catch 22.

Once their mission succeeds and the Queen is dead, Daleina and the rest of the Heirs give a command - "Choose" - to the spirits, who are then sent into a state of equilibrium until they choose the next Queen.

I don't want to give anything else away, but once again, things don't go quite as planned at the Choosing. In a dark twist, there is a lot of bloodshed, mayhem, and vengeful spirits who will stop at nothing to follow their instincts to destroy.

All in all, this was quite a pleasant surprise for me. I didn't realize when I picked it up that this was a YA book. And that it turned so dark was an added bonus. The Queen of Blood was a nice addition to the saturated YA market, a market I tend to avoid unless something really catches my attention. The writing was fast-paced, concise, and didn't have throwaway scenes like so many YA books do, scenes that don't advance the plot forward.

4/5 bloody stars for this one. I'll more than likely pick up the following books in the series, assuming they are similar to this one.

More in this category: « Kill the Queen (Crown of Shards, #1) by Jennifer Estep - book review The Sentinel Mage (The Cursed Kingdoms #1) by Emily Gee - book review »