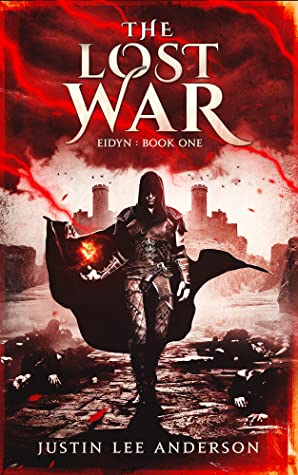 *This is not the official SPFBO book review. I read it for my own enjoyment*

Blurb: The war is over, but something is rotten in the state of Eidyn.

With a ragged peace in place, demons burn farmlands, violent Reivers roam the wilds and plague has spread beyond the Black Meadows. The country is on its knees.In a society that fears and shuns him, Aranok is the first magically-skilled draoidh to be named King’s Envoy.Now, charged with restoring an exiled foreign queen to her throne, he leads a group of strangers across the ravaged country. But at every step, a new mystery complicates their mission.As bodies drop around them, new threats emerge and lies are revealed, can Aranok bring his companions together and uncover the conspiracy that threatens the kingdom?Strap in for this twisted fantasy road trip from award-winning author Justin Lee Anderson.

I had high hopes from the outset after hearing good things about this book. Part of me wished this had been a new find, though, since rarely does a book meet expectations when you all you hear is how fantastic it is and that you should read it. Not that I was disappointed, mind you, for The Lost War is certainly a good book. It just didn't blow me away like I'd hoped.

We are introduced to Aranok, the main character, as he rescues a lad named Vastin from men sent by the king to claim taxes on Vastin's forge. He is accompanied by his bodyguard, Allandria, and together they loop Vastin into a quest from the King, Janeus. Janeus and Aranok are best friends, and Aranok is also the King's Envoy. Along with that, Aranok is also a draoidh, a type of magician who can control earth elements. As the story progresses, it's clear that most of the commonfolk fear draoidhs, but realize that in a lot of ways they are dependent on them. Aranok grew up privileged, as well as a magician, yet he comes across as humble, brave, and generally likeable. He has his flaws, including an impulsive streak that gets him into trouble at times. But I truly liked this character. I also liked the other characters in what becomes a troupe of travelers on a quest. Allandria brings sense to Aranok's impulsivity and they balance each other well. Samily is a Thorn, a well-trained warrior monk who is asexual (she's a woman, but isn't sexually attracted to any gender, so that was unique), a nearly unstoppable fighter, and one of my favorite characters in this book. She challenges Aranok's lack of faith in God without being preachy, and it was a nice element to the plot. Then there is Glorbad, a rough around the edges type of mercenary who has a dark past he doesn't want to talk about, followed by Nirea, a sailor whose soft side often annoys her, but endears her to the reader. Meristan also joins the group, a priest who is also Samily's teacher. All together, they set off on a quest for the King to rescue (maybe? or maybe not) a Queen from the clutches of the mysterious Mynngogg.

Now, from the outset the plan doesn't go as, well, planned. The group keeps getting sidetracked from their quest by anything from scary demons in cocoons (yes, you read that right) to murder. I found myself frustrated at times, wondering how these various smaller quests fit into the whole of the plot. And not every loose end made a lot of sense at the end, either. Perhaps they will be tied up in the next installment.

The magic system is straightforward enough, yet left me wanting more information. As mentioned before, there are draoidhs who can wield various elements, such as earth, air, fire, etc. They specialize in one area. Then, as it turns out, Samily can change time. There is little explanation for how this actually works, and the information is leaked slowly through the book as to how draoidh power works, as well. It was a bit dissatisfying, in my opinion. However, this might also make more sense in the next book.

The worldbuilding was phenomenal, and my favorite part of the book. The author lays it out bit by bit, and each setting was as intriguing as the last. Each element, from zombie-like people to Reivers, seemingly a type of nomadic warrior people, to terrifying demons kept the plot racing along with little breathing room. I absolutely was enthralled by the fight scenes, mixed with debates on faith, joined by interpersonal relationships that seemed flawless and smooth. The writing was stellar.

All in all, I really did enjoy The Lost War and will certainly be picking up the sequel when it is available. If you are a fan of high fantasy, mixed with magic, terrifying beasts, memorable characters, and don't mind loose ends or a little mystery to the magic, pick this one up. You won't be disappointed.