CHICAGO BY NIGHT 5TH EDITION is technically the third edition of the seminal Chicago by Night city book supplement for Vampire: The Masquerade. Way back in 1991, the book was released for the then-new series about playing tragic misunderstood creatures of the night a decade before Twilight made it uncool. The book was a shocking change the kind of books present from Dungeons and Dragons or even Call of Cthulhu. It was adult, edgy, racially diverse, sexually diverse, and full of complicated politics your player characters were meant to involve themselves in without shooting up the place. Well, yeah, they'd probably shoot up the place anyway but it wasn't advised.

The premise is the same for Vampire: The Masquerade as a whole. The World of Darkness is one where immortals walk among humanity, feasting on their blood and forming complicated societies that continually jockey for power like a vampire Game of Thrones. The young rebel against the old, the poor against the rich, and the powerful pull the strings of the weak(er).

As awesome as the original CbN was, it's almost thirty years old now. It was updated in 1993 for Second Edition but even that was part of an era's end. City books have never been the best selling products of Vampire: The Masquerade and the setting ended with lots of potential ways for the main characters to affect the city. Any further updates would be immaterial as the city would be unrecognizable.

Nostalgia has a powerful effect on the aging gamer, though, and Onyx Path Publishing revived the V:TM gameline with the Vampire: The Masquerade 20th Anniversary Edition. We're now on the 5th Edition of that game and they've created a similar update to the Chicago setting. It was successfully Kickstarted in 2018 and only now has been released to the public.

The new Chicago is secretly ruled by Kevin Jackson, a former Cabrini Green gangster turned respectable undead businessman. He has successfully seized control over the city in the chaos of the recent events in the setting and set down a brutal set of laws designed to make him the most revered Prince in America. He has recruited some of the Anarchs (rebellious young vampires) who opposed the former Prince and turned them against their fellows.

The book updates the setting to 2019 from its early Nineties roots. A lot of social, government, and economic changes have happened both to Chicago as well as the nation as a whole. The history of Chicago incorporates such things as the failed Chicago Olympics bid, gentrification (including the destruction of Cabrini Green), and the collapse of Gary, Indiana from a dying town to a dead one. It also incorporates some facts about society ranging from segregation to violence in order to better roleplay the city's inhabitants.

This is a gorgeous book and one that was made with every possible attention to detail. The art is different from both the classic black and white V:TM art as well as the V5 photoshopped pictures. Every vampire in the book has a portrait and while not all of them match their original appearances, most are just beautiful. The layout is also extremely well done, drawing attention to the little sidebars and tidbits designed to make the lore evocative.

The real appeal of the book, though is it's immense attention to detail as well as its usefulness for making the controversial 5th Edition make sense. While a fan of 5E, I feel it made numerous missteps and may have changed too much for the average player. This is not the case here as we see a seamless blend of the old with the new. Things like the Beckoning, Second Inquisition, and Anarch/Camarilla War are all integrated in an organic fashion that allows what was good about the old to be kept while advancing the plots of characters in new directions. 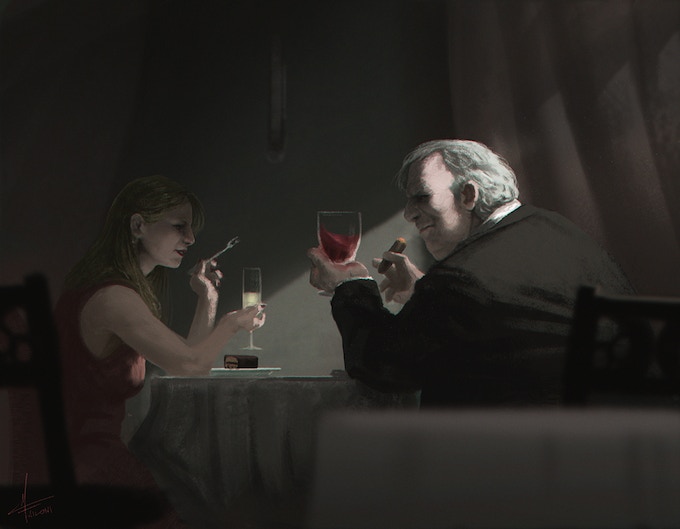 I absolutely love the method of handling NPCs in this book with every one of them detailed with mortal history, vampire history, their current plots, mortal retainers, and what their public identities are. It's everything you could possibly need to know how to do serious roleplaying as well as any number of adventure hooks with practically any character. Characters I loved in this book were Anita Wainwright, Critias, Maldavis, Bennet Steadman, Flyboy, and a dozen others.

The book continues the original CbN's conflict between the Anarchs and the Elders. V5 was criticized for returning to this conflict over the Camarilla vs. Sabbat but I love it. Kevin Jackson is ruthlessly purging the Anarchs but doing it in a subtle backhanded way. The conflict has multiple leaders and partipants that mean, however the PCs choose to fight the war (if at all), they have strong personalities to work off of. The treason of Damien, a long-beloved Anarch hero, worked surprisingly well in illustrating how the years can wear down even the most noble soul.

Diversity-wise, this is one of the strongest books in V:TM for any edition. There are gay, straight, transgender, black, white, Native American, rich, and poor characters that help illustrate Chicago from multiple perspectives. As a better author than me said, "reality has a diversity bias." One thing that I shouldn't be happy about but am is the fact that with only one or two exceptions, almost every vampire in the book has a horrifying side to go along with their more likable qualities. Even decent-ish folk like Anita Wainwright crave bloodthirsty (ha!) revenge on their enemies or plan to use other Kindred as dupes.

A lot of gamers don't buy books for the storybeats and world-building, though. How is the crunch of the book? Well, the biggest thing the book provides is the rules and material for the Lasombra. One of the biggest criticisms of V5 was it didn't provide rules for popular clans the Assamites, Giovanni, Followers of Set, Tzimisce, Lasombra, and Ravnos. The Lasombra get a full write-up here with roughly half the clan defecting to the Camarilla as well as rules for their new discipline of Oblivion.

The authors of the book have the hard job of explaining why the Lasombra, a fanatical and snooty clan that hates all things Camarilla, would join with their ancient rivals. I think they did a pretty good job of making it justifiable. The fact that only half the Clan joins also makes it believable to me. I won't spoil their reasoning but it's spelled out in their Clan section. 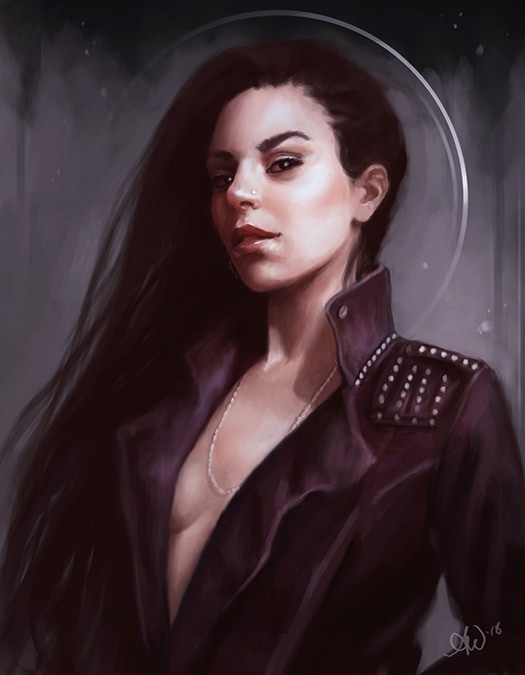 If I had to pick a favorite part of the book out, it would probably be "The Sacrifice" which is a chronicle at the end of the book that could easily fill out an entire campaign for Storytellers. The player characters are assigned by Prince Jackson (willingly or not) to serve as bodyguards as well as tourguides for a visiting Lasombra delegation. If the negotiations go well, they can make the Lasombra a part of the Camarilla (something the player characters may wish to prevent). While published adventures are always a bit of hit and miss, I feel this did an amazing job. It also showed why some Lasombra would probably fit in well to the Camarilla while others would just make it worse. Kudos to the creators.

Stats-wise, in addition to the write-up for Oblivion, we also have plenty of adventure hooks and Loresheets. The book provides the rules for creating your own cities and adventures plus also making coteries for vampires to interact with. It's not my cup of tea but I think people wanting to expand their city-write ups will find the book more than worth its cost. I think my favorite of the Loresheets has to be the Book of Nod and Malkavian Madness Network. Both of which will help my current characters.

Are there any criticisms? Well, die-hard fans of V20 will note that this book isn't metaplot agnostic by any means. The Second Inquisition plays a huge role, large numbers of characters have succumbed to the Beckoning, and many old characters have been knocked off by the random hand of fate. A few characters like Joshua, Al Capone, Juggler, Dickie, and Doctor Genet also get mentioned but aren't detailed in the book. They were detailed in previous supplements but new gamers could be confused by their inclusion.

In conclusion, Chicago by Night 5th Edition is an amazing book. I loved every single V20 book and I'm probably not the person to criticize any work by Onyx Path. However, I think this is easily the best of 5th Edition and shows exactly what can be accomplished in that setting if you give it a chance. A lot of old favorites return and are made better, deeper, and more intense by their updates. The new characters also include what I'm sure will be classics to come. It's not the best V:TM book of all time but it is probably in the top five. The hardback is exceptionally well done and a high quality in terms of paper, art, and binding. I definitely got my money's worth Kickstarter-wise.