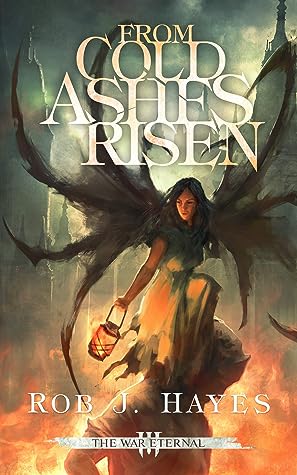 This epic conclusion to The War Eternal series was almost exactly as I expected - which isn't a bad thing. Eska's story has been full of twists, turns, and a character arc that is almost flawless. Book one set the stage by introducing her as an arrogant, self-centered little prick, but book 2 expanded that arc to reveal the reasons WHY she was the way she was. The first-person narration, told in the past tense, was unique and well done. Book 3 brought Eska's story to the foregone conclusions that have been hinted at throughout the whole series.

While I wasn't totally sold on how things wrapped up, I wasn't disappointed. The scope of the story, especially in a world as complicated as this one, is hard to contain in just three books, told from one perspective. Not only do cities float, or come out of the ground, not only do gods fight and humans pay the price, not only do other realities exist and intersect with each other, but there's a character whose story needs to be told, and her voice heard. And this is where Hayes really shines. He weaves the complexities of world-building, prose, and plot without sacrificing his characters and their needs and voices. It's a skill that takes honing, hard work, and diligence. The War Eternal shines as a series that manages all the complexities of the fantasy genre and the masters the difficulty of immersing a reader entirely into a new existence. It's why readers love fantasy, and Hayes nails it.

So, to this book in particular. Eska has reached the point where she is focused solely on her mission: revenge at all costs. There were moments where she was side-tracked, but this book brings her to the climax. The ultimate showdown. Everything Eska has worked for and sacrificed - the costs to her soul have been huge. She has given everything for her mission, and it's not just impacted her personally but also impacted her friends. One of the outstanding themes of this book is that our choices don't just affect us, they affect everyone around us. It's a hard truth, especially for choices where the consequences end up hurting those we love. Eska barrels through the warning signs that her choices are leading to destruction, so intent on her revenge that she damns those around her, too.

It's a revenge story that doesn't end like most. It's not tied up in a neat bow. Nothing, in fact, is ever neat and tidy with Eska. She's a whirling tornado that leaves destruction in her wake. And while I would have liked to have seen something a little less chaotic as far as a conclusion to a story goes, it also fits the theme of Eska's story. One thing I will say - don't get started on this series if you like neat, tidy endings that threads all the pieces together. But I'm not that type of reader. I don't mind messy conclusions, because I feel like that's more like real life. I mean, nothing in this world is foregone. Nothing ever ends how we think it will. Not every loose end in our own stories plays out and is tied off.

And therein lies the beauty in this story. It shows the darkness, but the darkness also reveals the light. People matter. Choices have consequences. Friendship is vital. And choosing your battles wisely, and for the right reasons, can make the difference in your life, and the lives of your friends and family.

4/5 stars for this book, and  4/5 for the series as a whole. The War Eternal is a fast-paced ride, so buckle up and enjoy the chaos. Get the series here.

Fantasy authors are well-known for long series - but how do you write sequels that add to a story, rather than making it worse?

Or listen to the audio-only podcast online

No featured book this week, because Jed forgot to ask!

Send us your questions:

Send us questions/comments/thoughts by emailing This email address is being protected from spambots. You need JavaScript enabled to view it. (or by leaving a comment below). We do our best to read every comment and we might even answer your question on the show!

For more about our hosts and our books: