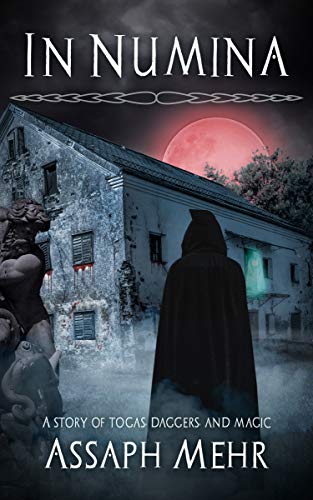 In Numina (Stories of Togas, Daggers, and Magic #2)

Assaph Mehr’s entry into this year’s contest has a bit of Latin flair, and more than a bit of actual Latin. In Numina is set in Egretia, a nation akin to a magical Ancient Rome. This oversimplification doesn’t do the setting justice; In Numina’s attention to detail and clearly well-researched worldbuilding are impressive, and make for an unexpectedly fun fantasy.

In Numina (Stories of Togas Daggers and Magic, #2) by Assaph Mehr Book Review

Urban Fantasy tends to come in two varieties. The first is a female heroine who is a dhampir, witch, or shifter who is investigating some horrible series of crimes while not quite fitting into either the human or supernatural world. The second is a male protagonist who is usually a wizard, loosely based on John Constantine (or Harry Dresden) and snarky as hell. Before you think I'm criticizing this, I should mention that I wrote I WAS A TEENAGE WEREDEER about a snarky investigator caught between two worlds and THE SUPERVILLAINY SAGA about a male wizard based in part on Harry Dresden.