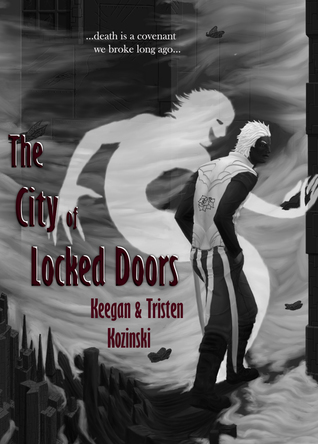 Noir, our main protagonist, wants nothing more than to avenge his dead brother. That takes him into the strange city where all of its residents are locked up every night by their sinister tyrant, Lock-and-Key. The story serves as something of a travelogue as we follow him navigating a place that would make Tim Burton proud. It's rare that I read fantasy that is different from anything else I've read before and while I can come up with examples, this really is a completely unique experience.

The locals transform into hideous monstrosities at night while necromancers restore all those who die, making them even more twisted as well as bizarre. Magic is commonly used and comes in a wide variety of different shapes and sizes. There's hemomancers, shadowmancers, necromancers, and basically every other type of blood, bone, or black magic you can expect.

The world-building is worth an entire encyclopedia of detail here with references to other cities, Tyrants, and more in casual conversation. The apocalypse has had an apocalypse and the bizarre macabre place this story takes place is the result. The fact it is a relatively straightforward revenge story is about the only straightforward thing here.

If I had any complaint, it is the fact that we are dumped into the city of Umbra with precious little explanation and we're simply meant to go along with its utter insanity without commentary. Every page is something terrifying and new without really giving us a chance to settle in. It is like nothing in our world and Noir isn't a terribly good protagonist to ground us since he never feels like explaining or thinking about what goes on.

In conclusion, this is a very imaginative and evocative world but I do think it's a bit hard to get into due to its sheer breadth of oddity. This is fantasy set in a place the Addams' Family and Planescape would find a bit off-kilter. It's a shame there's no illustrations inside since I think they would be trippy.

More in this category: « In the Land of the Penny Gnomes by Wesley T Allen - Book Review The Thief and The Demon »