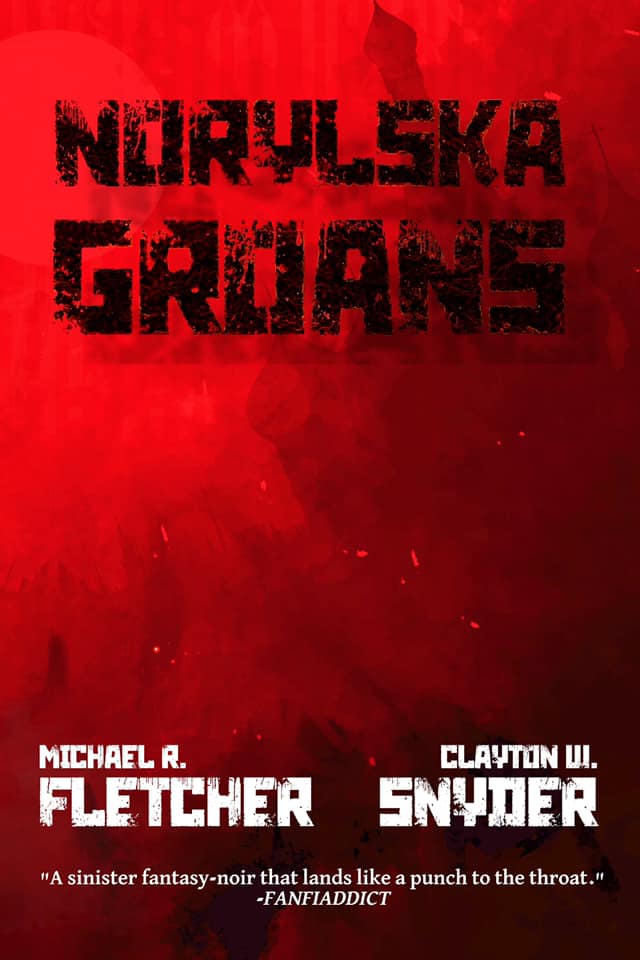 I had learned a couple of months ago that Michael R. Fletcher and Clayton W. Snyder would be releasing a novel together. I had no idea what the book would be about, but I immediately jumped at the chance to review it, as I had no doubt in my mind that it would be a uniquely maddening and wild experience. As most who’ve read the works of Fletcher and Snyder, I’ve grown accustomed to being genuinely awed, thrilled, and disturbed whenever delving into one of their books. And holy crap was I not disappointed with Norylska Groans!

In the city of Norylska, for most, the only way to survive and make ends meet is by doing the unsavory, the unthinkable, the morally questionable. In Norylska, the past lays in wait, its secrets threatening the very fabric of reality. For Genndy Antonov and Katyushka Leonova – two seemingly very different people, on very different paths, with very different histories – the city’s secrets will take hold of their lives in unimaginable ways, and place them on a collision course that will force them to reckon with their own dark skeletons.

A Russian-inspired low fantasy, the plot of Norylska Groans takes two individuals – a man trying to do right by his family, yet plagued by his actions in war, and a woman who has spent her life trying to please the men around her – and thrusts them into a conspiracy involving the city’s police, local mob families, and dark magic. I don’t want to spoil anything, so I’ll just say that this book has one of the coolest and most terrifying magic systems I’ve ever encountered in a fantasy novel, involving stones imbued with the memories and personalities of individuals – and sometimes of ferocious animals. The way in which the stones are used is what makes the plot so intriguing, thought-provoking, and engaging in its advancement.

What Fletcher and Snyder have managed to accomplish with the development of their characters is utterly brilliant. Genndy is afflicted by the effects of war, and the PTSD that he suffers seeps into every facet of his life, threatening to take hold and turn him into a monster; while Katyushka is the quintessential picture of the plight of women, implicitly silenced by the men in her life – constantly desiring to please them by offering apologies and lowering her standards. But these are two strong and capable individuals, and no matter the insurmountable odds thrown their way by the dark happenings in Norylska, they will fight to not only survive, but to live – and they’ll do so by any means necessary.

Fletcher and Snyder viciously grabbed hold of my interest with an impermeable grip – from the insight on magic and its users or Norylskan history at the start of the chapters, to the two very different yet similar protagonists, to the brutal fight scenes – their novel bleeds originality. Norylska Groans is a bleak and relentless onslaught that changes the game on the grimdark field – it's a grim-changer!

Max’s passion for fantastic stories began with weekly trips to the comic book store as a child. Now an English teacher at a boarding school, he is always reading. Max has written for sites like Geeks of Doom and SF Signal, where he created the Indie Author Spotlight. Max lives in Connecticut with his wife – who graciously embraces his need to display action figures all over the house – and daughter, who is inheriting her parents’ affinity for books.

More in this category: « The Monuments by Michael S. Bracco, Oliver Mertz and Mike Isenberg - Book Review Last Road to the Backwoods by Matt Soffe and Michelle Soffe - Book Review »