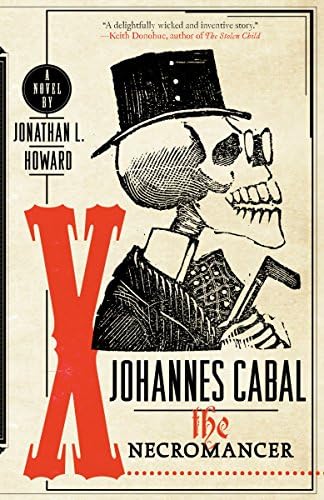 ‘Johannes Cabal: The Necromancer’ is a witty and amusing novel with an intriguing premise; What if a necromancer ran a soul stealing carnival to win a bet with Satan?

The prose in this novel were enjoyably humorous, full of wordplay and absurd similes. Fans of ‘Good Omens’ and other Terry Pratchett works are likely to find something they enjoy here. While the humor didn’t land as well as Sir Terry’s, for me at least, I know that’s a pretty tall order. There were, however, a number of amusing observations and situations that brought a smile to my face, or a chuckle here and there.

The chapters play out as episodic situations. Johanes‘s carnival train goes from town to town where he tries with varying degrees of success to swindle people out of their souls. In general, these segments didn’t build on each other very well and didn’t mount the tension or the stakes of the story, but most of them were entertaining and interesting. The plot is pretty straightforward: Johanes has to steal enough souls to win a bet with the Devil or he loses his soul. This premise does create a few problems for the story. What Johanes is doing is inherently unlikable. He is a bad guy stealing souls. While eventually the narrative starts to work to undermine this bad guy caricature with humanizing emotions, that particular train leaves the station a bit tardy.

In fact, I think characterization in this novel was a little weak in general. There are really only three characters that have any sort of depth at all, and most of that comes in the third act. For the first 2/3 of the book, it’s pretty tough to get invested emotionally. Which isn’t as bad as it might seem at first blush. This book mostly banks on novelty, wit, and humor. On a superficial level you’re rooting for Johanes to beat the devil, but emotionally, if he doesn’t win you don’t care. After all, he’s a soul stealing, devil summoning, murdering necromancer. This sort of takes the wind out of the plot’s sails. On the one hand, the story is interesting and funny, but it never quite grabs hold of you and takes you for a ride. The author also withholds Johanes‘s motivation for getting into all of this in the first place until the end of the book, which was a factor that might’ve triggered more engagement with the main character had it been established earlier in the novel. It’s kind of like a Checkov’s Gun misfire, the motivation is pretty obviously foreshadowed, so it isn’t a surprise, but by the time the story presents it to the reader, its moment has passed.

What the novel really does well is imagine a unique world where the devil and his embarrassingly foolish minions go toe-to-toe with a brilliant necromancer for a laugh. The carnies, the undead, the devils, and the rubes all mixed together into a delightful world that feels coherent and entertaining. This is why I specifically compared it to Good Omens. The two works felt pretty similar in tone and had some overlap in subject matter. Bad Omens is a little sillier and a little more polished, but if you loved it, this might be worth a read too.

All-in-all, I’d say this was an enjoyable novel that had a few things that I loved and a few things I didn’t. Clever wordplay and good world building tipped the scales of judgment from a three to a four-star read despite characterization and plot that were a little on the weak side. I’d recommend it to fans of humorous fantasy looking for a short read and an impish cackle or two.

Jordan Loyal Short is an author of epic fantasy, an inveterate nerd, and a small business owner. He has worked in a variety of industries, as a waiter, bartender, copywriter and more. These days, Jordan lives in Washington state with his wife where he is currently daydreaming about the end of the world.

More in this category: « Gideon the Ninth (The Locked Tomb, #1) by Tamsyn Muir - Book Review The Unholy Consult (The Aspect-Emperor #4) by R. Scott Bakker - Book Review »