Children of Time is Adrian Tchaikovsky’s first Sci-Fi and also my first experience with his work. This is a highly praised book, it won Arthur C. Clarke Award for Best Novel in 2016 and most likely, will be 5 stars read for anyone who has never read anything like it. Plus, for even more praise, the film rights to the book has also been sold to Lionsgate.

It’s a great story. The plot revolved around the race for survival between races on attaining a single terraformed planet; The races being the last surviving humanity that fled their dying Earth, and the sentient spiders accidentally evolved by a mad scientist; these beings were born and live on the planet. 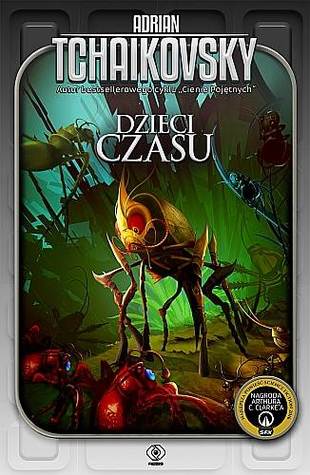 This standalone encompassed a lot of relatable topics to our society such as gender discrimination, greed, and on the bright side, empathy. It’s unique and epic, with tale spanning between generations to generations. Unfortunately for me, I have read something very similar to this in a manga called Terra Formars and because of that, my experience on this was a bit ruined. The premise of this book with that particular manga is very similar, with the differences being the planet is Mars and the sentient creatures are cockroaches. It’s not fair for me to compare the topic unrelated form of speculative fiction but I want you to first look at this gif so I can explain my reasoning. (Warning: gory scene ahead)

That, ladies and gentleman is a sentient evolved cockroach killing humans. This somehow affected me into thinking that this standalone will be action-packed because of the similar premise; it’s not. Children of Time plot direction is almost the total opposite. I expected more interaction between the two species but they happened only twice throughout the entire book, one very briefly too. I also felt the entire middle section from the alien’s side felt a bit boring; it was a bit too long and felt like learning biology and history from a textbook because there’s almost no dialogue on it. Finally, I don’t think it was necessary to divide the prose for the two races POV’s, the human side was written in past tense while the alien side was written in present tense; this made their stories felt disconnected to me.

I may sound a bit too negative here. This is because up until the 80% section of the book, I totally felt like this is a 3 stars book at best. However, I was wrong. The author has saved everything for the last 20% of the book and it was brilliant. No loose ends, the conclusion of this book was truly incredible and made all my struggle through the middle section of the book worth it.

Knowing that this is the author’s first Sci-Fi, I foresee a very bright future ahead of him. I highly recommend this to every Sci-Fi fans but not to anyone with arachnophobia; because.. sentient spiders.

For anyone who loved this book and wants something more epic, I recommend reading Remembrance of Earth’s Past by Cixin Liu. Trust me, the last book of that trilogy made everything this book look like an ant regarding its scope.