Toll the Hounds (Malazan Book of the Fallen, #8)

In a series replete with epic endings, this eighth chapter of the Malazan Book of the Fallen contains, to date, the most epic one of all.  It is with much joy that I can finally, upon rereading, upgrade this book as one of my favourites.

Before I start my review proper, I'd like to point out that reading Return of the Crimson Guards from the Malazan Empire series prior to Toll the Hounds is relevant to the timeline, both from an event and character standpoint.

The plot in Toll the Hounds digressed from the central arc of the Crippled God and was no less captivating because of it.  While the past few books gave readers an in-depth view of the Tiste Edur of Shadow, this one brought focus to the Tiste Andii of Darkness, of whom we were only given small morsels of information so far.  A mysterious race, given to excessive introspection and deep melancholy, the Andii is led by an utterly enigmatic and supremely great leader, the Son of Darkness.  There is still so much fascinating history to be learnt about the Tiste Andii that Erikson's recent series, The Kharkanas Trilogy, is currently being written to address this.

Anomander Rake, Lord of the Tiste Andii, Son of Darkness, is in my view, one of the greatest fantasy characters that I've ever read.  Even more amazingly, is how Erikson elevated him to such lofty ideals without ever having his point-of-view, as if the very enigma of doing so made him ever more compelling and charismatic.  What we did get were the viewpoints of other characters, be it his people or other races or even gods and ascendants, and their highest regards for him. 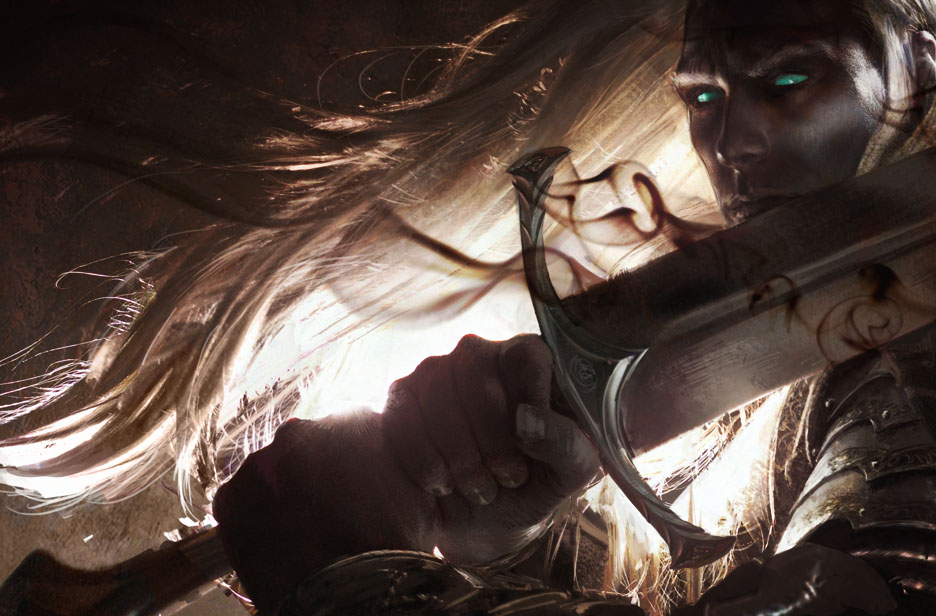 The chaos in you, yes, a fire on the promontory, a beacon piercing the profound entropy we saw all around us. And yet, so few of you proved worthy of our allegiance. So few, Lord, and fewer with each generation, until now here you stand, virtually alone.
The one who was worth it. The only one.

There is much skill in creating beautiful yet subtle symmetry in storytelling.  A skill that Erikson has in spades as evident in his narrative.  Toll the Hounds can be called as the penultimate volume in the Book of the Fallen as the next two books, Dust of Dreams and The Crippled God, form a two-part finale.  This vast, sweeping and intricate tale begun in Darujhistan in Gardens of the Moon and had now come full circle with a convergence of mind-boggling proportions.   The word 'epic' will not even begin to describe the confluence of almost all the major, or biggest, or most badass characters, descending upon the unwitting citizens of the City of Blue Fire. I cannot sufficiently praise the brilliant writing commanded by Erikson to tell the tale of this fateful city, which was the most engaging and unique ‘voice’ of that little round man in a red waistcoat, Kruppe.  The storytelling literally 'serenades' the reader with a combination of poetic, elegant, graceful and, at times, alliterative turn of phrases.

Arrivals. Glory and portent, delightful reunion and terrible imminence, winged this and winged that and escapes and releases and pending clashes and nefarious demands for recompense over a single mouthful of spat wine, such a night! Such a night!
----------------------------------
And this was a night like any other, a skein of expectations and anticipations, revelations and perturbations. Look around. Look around! On all sides, day and night, light and dark! Every step taken with the firm resolve to believe in the solid ground awaiting it. Every step, one after another, again and again, and no perilous ledge yawns ahead, oh no. Step and step, now, step and step.

The ratings for Toll the Hounds are probably the most divergent of this series, as the pace was very slow for a significant part of the book with a greater level of dense philosophical commentary and seemingly overindulgent introspection.  In fact, my initial read suffered because of this aspect.  However, being in the right state of mind as I tackled my reread and having gained a newfound appreciation for deep ruminations, I experienced a significant improvement in my level of enjoyment while reading this tome.  From themes of mortality and morality; servitude, sacrifice and salvation; redemption and restitution – it was so pervasive and pondering in the narrative that I do acknowledge that pacing suffers but I was so thoroughly immersed in it this time that it no longer was an issue.

While the climaxes of the previous books tend to commence around the last ten percent or with two main chapters remaining, we are treated to a doubly extended climactic ending in this volume.   This was due to the presence of more subplots and arcs in the narrative; all masterfully intertwined towards the aforementioned convergence that was most poignantly expressed in the voice of Kruppe.  And the ending set the stage for the two-part finale to come.

The Book of the Fallen is so named for its heart-wrenching and tragic tales.  These span from the small and personal ones to the immense and epic.  Was all this grief and suffering for nought?  For in the words of one of the greatest of all,

'There is no struggle too vast, no odds too overwhelming, for even should we fail - should we fall - we will know that we have lived.'