Heir of Novron (The Riyria Revelations #5-6)

I have a principle to never DNF a book or series, I believe that sometimes, stories will need some time to reach greatness. Riyria Revelations is a perfect example of this situation, it’s a series that proved this principle of mine to be a great decision for me. If I haven’t stuck with this series after finishing the first omnibus which I find really weak and underwhelming, I would be missing one hell of a fantastic series. It’s not without flaws but at the end of the series, the positives definitely outweigh the negatives by far for me.

The easiest way to describe this series for me is that it’s a step by step guide to adolescence for anyone who’s too scared or intimidated to start an adult high-fantasy series. Michael J Sullivan wrote this series to help his daughter cope with dyslexia and his motivation results in a high fantasy series which can be enjoyed by everyone from teenagers to adults.

The intensity of the plot and what’s at stake grew more serious as the series goes by, this include the gradual increase in quality over time. Michael will guide you step by step into adult high fantasy literature like a parent or a friend who guides you into your adolescence. Think of Theft of Swords as your kindergarten-middle school life, the plot is still simple, people will help you with your problems and you started making friends that maybe will go into your high school and college in Rise of Empire. It’s probably during this period where you’ll make friends that last a life time and grow your friendship, you tell each other your past, interests or in this case it’s where the past about Royce & Hadrian are revealed little by little. You’ll make mistakes you regret, some of your friends will stick by you, some will betray you and you’ll realize your past and present will eventually catch up to you in your adult life, in this case the final omnibus, The Heir of Novron.

The Heir of Novron is the final omnibus in Riyria Revelations series which consists of Wintertide and Percepliquis and before I continue with my review, here's a gorgeous artwork of the last book in the series done by Marc Simonetti. (If you haven't checked his work yet by now, do yourself a favor and do so. You'll see his perfect artworks on Game of Thrones, Mistborn, Kingkiller Chronicles and other highly acclaimed high fantasy series.) 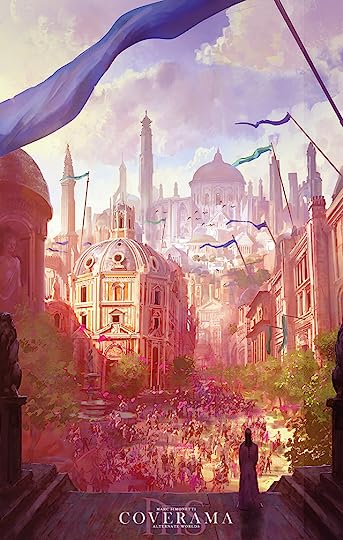 Like how everything from your birth will shape who you are and what you do in your adulthood, the plot and the ending to Riyria Revelations is the culmination of literally everything accumulated from the first book. A huge amount of plots, background and legends being weaved and foreshadowed since the beginning, it's not until the last 100 pages of the book you’ll find the thread of this big yarn being unraveled completely.

It’s a story about seeking redemption no matter what kind of past you have.

“And I wish to thank you as well, Royce."

He was puzzled. "For what?"

"For reminding me that anyone, no matter what they've done, can find redemption if they seek it.”

It’s about having your loyalty and bond of friendship tested.

“Is there a good chance I’ll get killed?”

“Odds are definitely in favor of that.”

Royce nodded, looked down at the scarf in his lap, and replied, “Okay.”

And to always have hope not only during the good times but most of all, during the bad times.

"A beautiful day might bring disaster, while a day that begins trapped inside an ancient tomb, might be the best one of your life. If you don´t abandon hope on pleasant days, why do so on those that begin poorly?”

Royce and Hadrian started really flat in the first omnibus for me, it’s not until this last omnibus I started to think they’re a really great characters. Their friendship and loyalty towards each other are amazing to see and the actions scene involving this duo in the last book is really well done, especially during the climax of both Wintertide and Percepliquis. It’s a shame really that a lot of things that shaped their relationship happened in the past which I assume we will get to see in the prequels and I know if I started with the prequels first, I’ll love this duo much more but probably find the narrative much harder to get used to than it already is.

While I still find this duo a bit overrated because of this reason, I can’t say the same towards the female characters in the series. Arista and Thrace/Modina are probably one of the best written female characters I ever read. Their development throughout the series is step by step crystal clear, their emotions are more evident compared to the main duo and by the end of the series, if you look back to the beginning of the first omnibus then you will realize just how stunning their growth is. It’s beautiful really to know that Michael wrote the fantastic female characters based on his wife.

“This book is entirely dedicated to my wife, Robin Sullivan.

Some have asked how it is I write such strong women without resorting to putting swords in their hands. It is because of her.

And she is my Gwen.

This series has been a tribute to her.

This is your book, Robin.

I hope you don't mind that I put down in words

How wonderful life is while you're in the world.

This series of course have its flaws. A few cons I have on this omnibus and the series:

-The narrative. My main problem with this series, took me 2 omnibuses to really get used to it and even then there are still so many moments that could have much more emotional impact for me if it’s not written this way. There aren’t any deaths in the series that surprise me or hurt my feelings since it’s so predictable and I can’t connect with the main characters emotionally despite almost all of them being greatly written by the end. This situation applied mostly only to the main duo.

-There’s too many withheld information at the beginning of the series which made the stories and character really flat. This might push away a lot of readers who doesn’t know what they’re diving into, like me.

-I find one character’s revelation behind his actions at the last book to be highly illogical.

Finally to answer the question that I’ve been asked from my previous reviews of this series,

Will I recommend this series?

Absolutely yes but please know this before you begin. If you’re going to start this series, do know that you’ll find the greatness of it by the end of the last book. Don’t come into this series like me thinking it will be some epic fantasy where there are massive war and magic being waged. There’s almost none, I don’t even think of this series as an epic fantasy, it doesn’t reach that scope.

However, it’s definitely a high fantasy series with great plot, friendship, grand adventure and a really satisfying ending. If you ended up loving the series since the first omnibus, then trust me, you’re in one hell of a treat but if you’re more like me who really dislike the first book, don’t let it discourage you yet, know that there’s a huge chance it won’t be that way by the end of the series. I find my journey with this series really worthwhile but I really hope there will no more sequels to this series. The ending is beautifully wrapped as it is and I don’t want to see the series being milked to death.

Thank you Michael J Sullivan for writing this fantastic series and even though I really like it by the end, this is where I must part ways with Royce & Hadrian. It’s not because I hate the duo, in fact it’s the other way. I don’t think of them as the best duo ever written like some of my friends did but I like the duo enough as it is now and I find the ending to their journey to be perfect here. I fear the duo will overstay their welcome in my heart if I continue with the prequels. I do however can’t wait to continue my journey with Michael’s work with his 'The Legend of the First Empire’ series which will took place in the distant past of the same world, Elan. Until then…