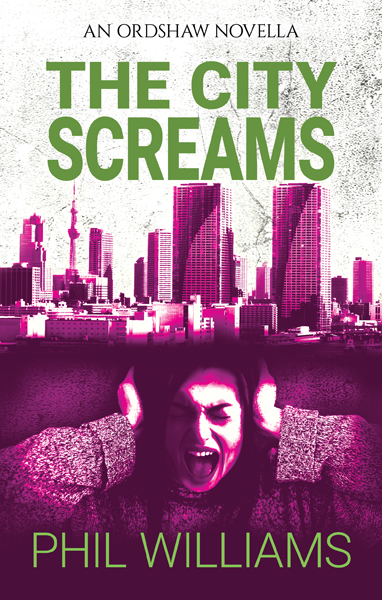 I'm a full time author based in Sussex, UK, spending most of my time scrawling urban fantasy thrillers but also a little on English grammar guides and occasional dystopian fiction. I used to teach, freelance and travel a lot but now I just write more than is healthy.

The City Screams; no it's my 10th or so publication, as far as I'm aware.

This is the story of Tova, a young deaf lady from Ordshaw, travelling alone to Tokyo for experimental ear surgery. She's eager to change her life around, but things don't go according to plan, and what she hears is anything but normal.

You can expect a fast-moving thriller with a modern setting and weird goings on. There's a bit of humour and heart in there, and perhaps a few scares along the way. It's also a bit of an exploration of deaf culture, which in itself may transport some to another world...

I hope so. The City Screams has two big advantages: the perspective of the main character is pretty unique, as she experiences the world without sound; and it's also a quick, pacey read - so ideally people will read it too quickly to notice any faults.

If I only knew.

Editor's Note: Keep your head in the game, Phil!

I first entered last year because it sounded like a gateway drug to fame and fortune, as I was led to believe after I read Senlin Ascends and asked 'Where did this fascinating book come from?'

It led me instead to discovering a delightful community of writers and readers. Which is wonderful. But I still crave that fame and fortune.

Editor's Note: A real, bona fide fortune-hunter! We are glad to have you.

Depending on when this gets read, I'm probably on Book 5 or 6 of the Ordshaw series. You can expect continuations of the two story arcs already in motion, and the starts of a couple of new threads, all tying into the same world. Book 5 moves towards a more global, action-packed story.

Alongside this contemporary fantasy madness I've also got a few dystopian books in the works, and for the really keen there's an English tenses exercise book.

Only my deepest, most heart-felt appreciation to all involved in the contest. It's a remarkable thing.

Editor's Note: Thank you for doing this, Phil! I won't lie, "The City Screams" sounds fascinating to me personally, and I'm looking forward to seeing what Fantasy Book Critic's reviewers think of it!