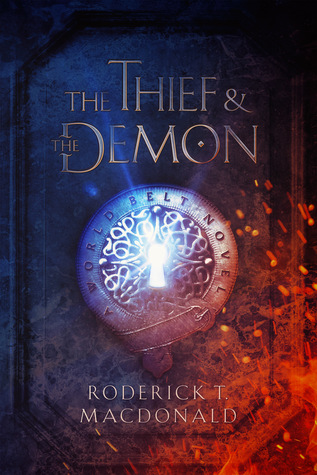 I'm not great at Jigsaws. Excellent at Minesweeper. I don't think I've ever played Sudoku. I'm Scottish, and American, which makes for a lot of political reading and a great deal of frustration. I believe in beauty, and language, and the beauty of language. I don't necessarily think it will last, but I'm here for the ride.

The Thief and the Demon, it is my self-published debut. There were others before it, one of which may be exhumed in the next half-decade. The others... only if I live past 80 will those be shared with the world.

Editor’s Note: A lot of us have trunk manuscripts lying somewhere in a ruffled-up mess; your anxiety to share early writing is well-understood here!

It's a fast-paced epic (you can be both, right?) fantasy built around the unravelling of mysteries. The setting is large, old, and magic rich. Everyone thinks they know how the world works, and almost all of them are wrong. It is also at heart a redemption story, following an initially unrepentant thief from selfishness to a stab at heroism. I'm an old fashioned soul at heart.

Yes. Why? It's smart, it's entertaining, and I believe it is well thought out from start to finish, and populated by characters, not caricatures, which can be hard to avoid doing in fantasy. I believe it truly is a fresh take, and look forward to your opinion of it! The universe was not created on a whim, and drives a lot of story without being revealed - that is for later books in the series, many of which will actually be stand alone adventures.

Behind the bar at The Staggering Rose. Ask for Red Wat.

Because why not? Because I'm not afraid of honest opinions - which for a very long time I used to be. Because, if I'm fortunate enough to go far (and I recognise the competition's calibre), I will be glad of the exposure that will bring my book. I'd like a wider audience to find it, this seems an excellent way to do that.

I am doing final edits on The Killer and The Dead, a much darker tale (and The Thief and The Demon is not sunshine and roses!) set in the same world, but focused in one desperate slum where the dead and the living have been forced to coexist, and the living are condemned to die. Love, sacrifice, revenge, paranoia. Out later this year.

To the other contestants: Good luck, I think we are all already winners to have got this far! To the judges: Thank you for your efforts on our behalf, and may you find many excellent adventures ahead of you. To Mark Lawrence: Thank you so much for creating this opportunity for self-published writers. You didn't have to do it, but you did, and it's, pardoning the pun, fantastic.

Three giga absurdities and a huge tract of land.

Editor’s Note: We haven’t heard that one before. Thank you for joining us today, Roderick, and we wish you the very best of luck in the competition! Your next project sounds promising too, as fans of darker stories – let us know how it goes!