Scourge of the Betrayer (Bloodsounder's Arc #1)

Oh man, that was compelling and original. I have a good feeling about this trilogy.

I came to the realization when I started this book that it’s been seven months since I read any full-length grimdark novel. I don’t even know why because grimdark is one of my favorite genres, but somehow I’ve been drowning in other genres for more than half a year. Let’s just say that this book was a damn great choice for me to mark my return to the genre. I first stumbled upon Jeff Salyards’s work in the Evil is a Matter of Perspective anthology and from there, I thought his writing was really intriguing. I knew after reading his short story that eventually I would have to read his main trilogy, which started with this book.

Scourge of the Betrayer is the first book in Jeff Salyards’s Bloodsounder’s Arc trilogy and it is a gritty, compelling, and unconventional start which I highly enjoyed reading. Some of you may wonder why this book is lowly rated on Goodreads. The reason is simple: there is almost nothing conventional about this book. The author really took a gamble with his storytelling style by using this book in a way I envision as only a setup for the rest of the trilogy.

There are three main things that made Scourge of the Betrayer unique. First of all, this book contained only four chapters: two long ones and two short ones. Second, the main character’s weapon of choice was unique, which I’ll get into later. Lastly, as I said before, the storytelling style is very different.

Salyards’s unique storytelling style came mostly from his keeping the reader in the dark regarding the events taking place through the use of the first person perspective of the main character, Arkamondos (or Arki). Although technically Arki is the main protagonist of the book and we see the story unfold solely through his perspective, he’s not actually the main focus of the book; that role is reserved for the charismatic and infamous warrior from the Syldoon Empire, Captain Braylar Killcoin. Arki is a bookish scribe who's looking for fame and fortune; to achieve this, he has decided to accept the job of chronicling the journeys and exploits of Braylar Killcoin.

“And if that only inflames your curiosity, I say to you, a writer without curiosity is a bird without feathers.”

To be honest, I’m not surprised by the low average rating on Goodreads. This is an unconventional book, as the world-building and pretty much everything other than characterizations and actions was scarce. Don’t get me wrong, we do get to see some world-building, the dark magic that’s happening, the true direction of the storyline, but they were all done bit by bit making this book more like a setup. We (the readers) are more or less put in the same situation as Arki; we have no idea what’s going on except that we need to record and follow Braylar Killcoin.

Usually, I would mind this a LOT and I think a lot of readers would probably be put off by this storytelling direction. But somehow it worked well for me. This book is not an epic fantasy, but instead felt intimate due to the engaging first-person prose, great characterizations, and close quarter action scenes. Also, some of the dialogues can be crudely humorous and it reminds me a bit of the banter in the Gentleman Bastards series, which is something I’ll never get tired of.

“Gurdinn ignored him, still speaking to the baron. “I would sooner soak my cock in honey and ask a bear not to bite than trust a Black Noose, my lord.”
Braylar clapped and said, “I wouldn’t have suspected you of such colorful wit, Captain Honeycock. You’re a man of surprising gifts.”

Almost the entirety of this book was driven by dialogues and action scenes. Remember that this is a short book; it’s less than 300 pages long and it took me more or less five hours to finish. However, within that length, the quality of the action scenes in this book somehow managed to already surpass a lot of fantasy books I’ve read. I need to talk a bit about the weapon of choices here. A lot of main characters tend to use a sword/spear/axe as their main weapon of choices.  Salyards threw away all these choices and instead gives the two main characters a flail and a crossbow. These together were a very unconventional choice of weapons and something I truly appreciated. The author’s action scenes reminded me of Joe Abercrombie’s: bloody, brutal, vivid, and intricate. Plus, huge bonus points for the author on showing the importance of armor. What makes all this even better? It seems like all the great action scenes here are just a little taste of what is to come in the sequels.

Picture: Scourge of the Betrayer by Marc Simonetti 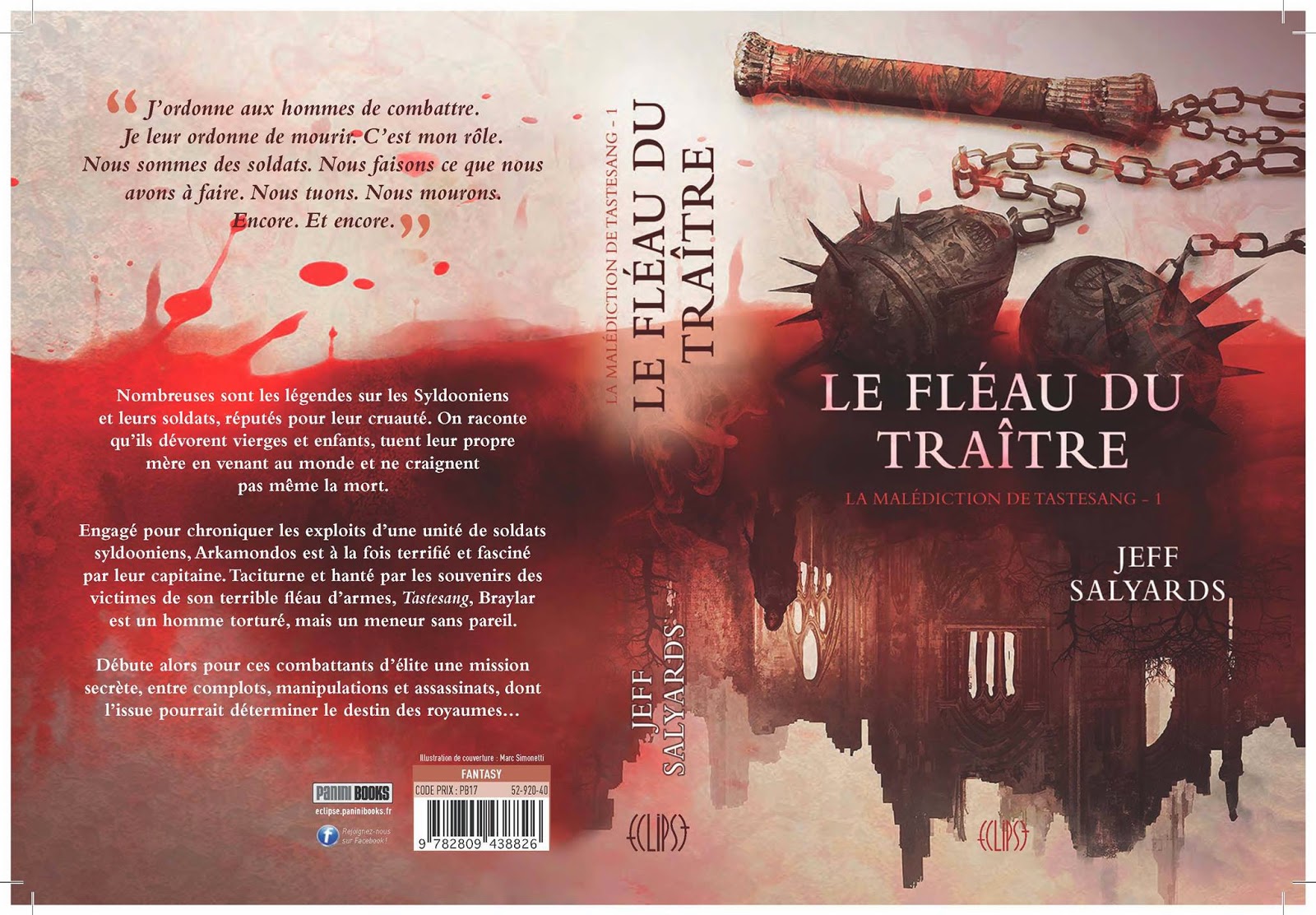 The only minor con I had on the book was it took quite a while for me to remember who the side characters and what their roles were. This is probably the author’s intention for it to happen that way but I always prefer getting to know the characters sooner rather than later. Also, this didn’t affect my enjoyment but there were some typos I found within the book.

Overall, Scourge of the Betrayer is a highly engaging, gritty, and intimate read. It was a fine choice for me to return to the grimdark genre. It’s most likely just a setup book for the rest of the trilogy but it was still a bloody refreshing read and I can’t wait to find out what will happen next. Wherever Braylar Killcoin takes Arki next in the story, I’ll be there to observe their journey

More in this category: « Veil of the Deserters (Bloodsounder's Arc #2) Blood of Dragons (Rainwild Chronicles #4) »