Q & A with Maurice Broaddus

While Tor.com has a very full and impressive lineup of novellas coming out in the near future the one that stood out the most to me was Buffalo Soldier by Maurice Broaddus.  A secret agent escorting a mysterious young boy through a North America completely different from our own?  What is not to want?  After reading the tale, and enjoying it very much, I asked if the author would be willing to answer a few questions.  Thankfully he agreed!  But first, some information on the upcoming tale!

Having stumbled onto a plot within his homeland of Jamaica, former espionage agent, Desmond Coke, finds himself caught between warring religious and political factions, all vying for control of a mysterious boy named Lij Tafari.

Wanting the boy to have a chance to live a free life, Desmond assumes responsibility for him and they flee. But a dogged enemy agent remains ever on their heels, desperate to obtain the secrets held within Lij for her employer alone.

Assassins, intrigue, and steammen stand between Desmond and Lij as they search for a place to call home in a North America that could have been. 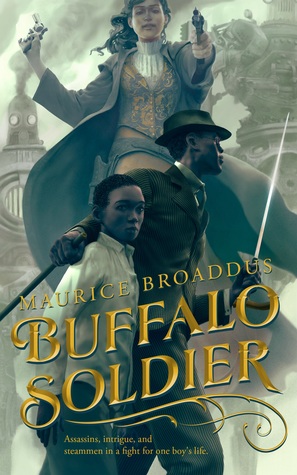 First of all, thank you so much for agreeing to a Q & A.  I loved Buffalo Soldier and have a major fascination with GOOD alternative history and just had to ask a few questions.

I'll start with a variant of what is often my opening question.  Which came first,   Desmond Coke and Lij or the alternative world they live in?

MB: The world came first. I created this world for a short story I wrote called "Pimp My Airship." Though the story was well received, there was this recurring criticism that readers wanted me to unpack this world a bit more. One of the plot points in "Pimp My Airship" references “the Star Child” (who will be Lij) and “the Five Civilized Tribes,” the idea of that nation gets fleshed out in Buffalo Soldier.

Alternative history is tough to do right; how much research is required to make sure it is realistic despite the fantastical aspects?

MB: I’m not going to lie: researching and worldbuilding are my favorite parts of writing. I spend a lot of time researching and building so that the world not only feels lived in, but the reader can walk around, kick the tires, and it hold up. It’s one of the reasons “Pimp My Airship” was criticized: I spent so much time building that world that even without showing it all to the reader, there was a sense that it was dense and complicated. And I was perfectly happy to do all of that just for that short story.

To flesh things out for Buffalo Soldier, I began with researching the Seminoles, the “Black Indians,” as a starting point for my First Nations world. Not just to have a thorough knowledge of tribal life and culture, but also to create a history that would allow them to be where they are in the story. After that came researching what their technology might look like and its impact on their architecture.

And anytime I work on a steampunk story, my office turns into part fashion design studio as I figure out outfits for people to wear.

Garrison Hearst shows up all over in fiction; I loved the portrayal of him in Deadwood for instance.  Leaving the question of if we actually saw Garrison Hearst to the side I gotta ask what it is about the man that sparked your interest or made him a must have character in your own story?

MB:  In the story, all of my steampunk stories, there’s this tension between the government and the business interests that run it. I needed a powerful, shadowy business figure, one with ties to the media, because with business, money, and the media, that person call pull the strings of any politician. In this day and age, that’s true power. Invoking the Hearst name brings all of that to mind in a subtle way before I’ve even started one line of description. Of course, with that name I also run the risk of people thinking football players not business moguls...

Buffalo Soldier was a story full of stories and Coke is obviously a great story teller.  Were the stories all original or is Coke telling some old tales in a reader could look up?  If so do you have any resources a curious reader can go to find your inspirations for the stories Coke comforted Lij with?

MB:  You can blame my mother for that. When we were children, she would often regale me and my siblings with all manner of “duppy” (ghost) stories, including a variation on the one that Desmond tells. She’d spin these tales so often, we tuned her out. Or at least I thought I did.  Twenty years later, they start creeping into my stories.

One of the things my mother used to impress on me was how their stories were an oral tradition. That they didn’t have television or the internet growing up (this would also be where she’d mention that they had to talk five miles in the morning to collect their water for the day before they went to school), but they did have stories. Her lament was that with technology, some of these stories would be lost. But I was happy to find them being preserved online. The River Mumma. The Rollin’ Calf. Br’er’Nansi. Ole Higue.

With all the detail that went into this alternative North America it would be a shame to hear we have hit the end of the story.  Will Buffalo Soldier be part of a series; either continuing Coke and Lij's stories or at least keeping the setting?

MB:  We haven’t hit the end of the story. There are now nearly a dozen stories set in this world (“Steppin’ Razor,” “Know the Ledge,” “I Used to Love HER,” etc.).  By the time “Pimp My Airship” takes place, the Star Child is in prison which is a whole other story to tell. Plus, I’m working on a full novelization of “Pimp My Airship” because, well, it turns out there was A LOT more to this world and story.

I know you have a trilogy of full length novels under your belt but Buffalo Soldier is not your first foray into novellas.  What does the shorter length allow an author to do with a story vs a full length novel.  What are the limitations?  And finally, do you find one more rewarding than the other to write? 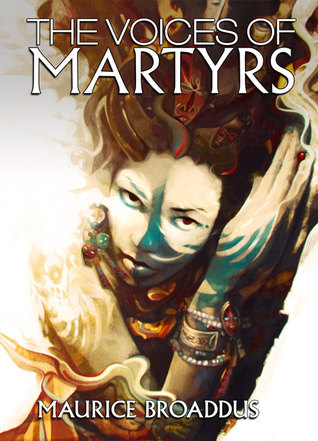 MB:  Buffalo Soldier is my fifth novella length work. My first love is short stories, but what draws me to the novella length is the best of both worlds quality: I have the novel-ish room to allow a story to breathe more, but keep the power/punch of a short story. That said, invariably, people tell me that my novellas should be fleshed out into novels.

And of course the typical final question to any author Q & A.  What are you working on and what can we look forward to in the future from you?

MB:  My short story collection, The Voices of Martyrs, is out now. I am the guest editor for Apex Magazine’s April issue. I have a stories coming out in the next issue of FIYAH Magazine and in the Mixed Up: Cocktail Recipes (and Flash Fiction) for the Discerning Drinker (and Reader), Steampunk Universe, Straight Outta Tombstone, and Monster Hunter Files anthologies. Well, while I’m waiting to see where three novel length projects land, I am furiously writing short stories and another novel.

Thank you again for giving me some of your time.

My review of this wonderful little story will be up closer to release day.  Thanks to all that checked out this interview and please let us know what you think in the comments!