I'm very pleased to say that we have been graced with an interview from one of my favorite property's new authors. BLAKE HOWARD is one of the three writers on WINTER'S TEETH for VAMPIRE: THE MASQUERADE. A comic book following the adventures of former Anarch, Cecily Bane, and a current crop of Anarchs led by a Thin Blood named Colleen Pendergrass. They've just released their first volume in graphic novel form and are now seven issues into the story as a whole. He was kind enough to answer a few questions for us and I absolutely loved his answers.

1. Could you describe Vampire: The Masquerade: Winter's Teeth for us? What sort of comic book is it?

Winter's Teeth is an Action/Horror comic that focuses on two distinct storyline. The primary focuses upon the Brujah, Cecily Bain, and her adopted Caitiff childe, Ali de Luna. The second is centered along a coterie of Anarchs who attempt to survive the treacherous politics of undead existence.

2. Do you think it's a good introduction to the setting for those unfamiliar with the tabletop game?

That was certainly the goal. We purposefully included characters like Ali and Colleen to serve as audience inserts. They are unfamiliar with the ways of the Kindred, and as they learn, we hope the reader does, too.

3. How did you become involved in writing for this comic?

My wife and co-writer, Tini Howard, and I have been Vampire fans for a long time. When Fifth Edition was released, there was a lot of hubbub about wanting to extend the World of Darkness to beyond just video and tabletop games. We reached out to the ineffable Jason Carl, who informed us that there was already a Vampire comic in the works, and he got us in touch with Vault comics, who brought us on board the creative team.

4. Is it hard splitting the efforts between those involved?

Not at all. I live with my direct co-writer, and Tim Seeley has been such a great partner on this. We love talking shop and, as the resident "Vampire uber-nerd," I am often called upon to answer questions about minutia and trivia.

5. Could you describe the protagonists of Anarch Tales?

Anarch Tales focuses upon a coterie of vampires from Minnesota. Colleen, a Thin-Blood, serves as the den mother to her estranged husband (and vampiric creator) Mitch, the aloof and sly Nosferatu named King Rat,  and the alluring and mysterious Priscilla. 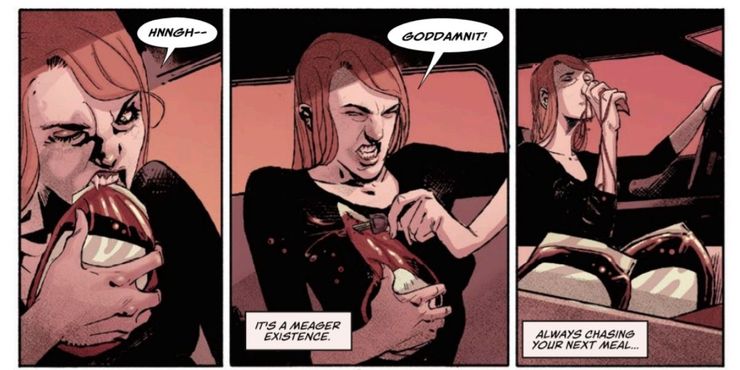 5. Who is your favorite of the Anarchs?

King Rat is a refined version of a character I played many years ago. I have an attachment to him in that regard, however, the more the storyline goes along, the more fond I've grown of Priscilla.

6. What are they rebelling against? (Principal Skinner voice)

Not all of them are politically minded! As the lore reminds us, to be an Anarch is to exist outside of the support structure of the Camarilla (while still being subject to their bylaws.) But, as future stories will get into, it is hard to stay on the sidelines forever.

7. The initial road trip ended with a splitting of the fellowship (so to speak). What sort of challenges will they be facing post-issue #5?

The coterie has, indeed, parted ways. Now is the time where readers will see how they all operate as individuals rather than parts of a whole.

8. I understand that you write all of the Vampire: The Masquerade 5th Edition RPG material at the back of the book. How much fun is that?

Loads of fun! Getting to flesh out the Twin Cities as a game setting is great for someone like myself, who has been playing Vampire for decades, now.

9. Do you have any favorite articles/characters/concepts/loresheets you've written for the book?

I was really pleased when we got approved to add a Nictuku loresheet. It is a brief hint dropped into King Rat's backstory, but one that might become more relevant later on...

10. I was very pleased to see that Winter's Teeth was an ongoing and not a mini-series. Can we hope to see it continue for awhile now?

We have a lot of plans for the future! The best way we can all see them come to fruition is to continue supporting the book.

11. How has fan response been?

Amazing so far! Especially international fans, who often times don't even have access to the physical books. Our numbers have been great, and we couldn't be happier with our reception.

Thank you for sitting down with us!