I don’t think I truly knew what I was signing up for when I started reading this book because it was beyond anything I could ever dream of, and was insanely marvelous.

Beyond Redemption, the first book in the Manifest Delusions series by Michael R. Fletcher, is what I foresee as the beginning of a masterpiece series in the dark fantasy genre.

"In a world where belief defines reality, the Gefahrgeist is king.”

This is an incredibly dark, riveting start to a series. The Gefahrgeist (Sociopath), who can be defined as those who are driven by their own selfishness and limited ability to empathized with others, will do everything in their power to bend the world to their own will, along with the other Geisteskranken (Delusionist), who has the power to manifest their delusions. The reality is highly responsive in this mad world and with that comes an opportunity; the stronger a person or the masses belief on an idea, the higher the chances are that those ideas will be manifested in reality. The possibilities are limitless -- even creating a new god is possible.

“One truism lay underneath every choice and word: change what people think and you change the world.”

The plot of the book revolves around a boy who is believed to be the incarnation of a new god, and the several different forces who are trying to get their hands on the boy in order to control a god and further their own agenda. The story never failed to entertain me. It was incredibly hard to put down and every time I did, I would find myself reaching for it again, it was simply irresistible. The plot is truly violent, original, dark, gory, and filled with dark humor. It was also surprisingly philosophical. I was enthralled with this mad world right from the first page due to the originality of the concept.

“Failure may be a harsh teacher, but you tend not to forget its lessons.”

It wasn't only the story and concept that captivated me; the deranged characters were the perfect companion to enhance my reading experience. The main trio of the story was fantastically crafted. Bedeckt, probably the last sane man in this mad world; Wichtig, a minor Gefahrgeist who believed himself to be the Greatest Swordsman in the World; and Schelten, a deadly murderous Kleptic (Kleptomania), have become characters that I truly care about despite them being almost totally evil. I love their dysfunctional friendship, their interactions, their way of ‘caring’ about each other, and I thoroughly enjoyed reading all of their hilarious banter, clever manipulation, and bloody action scenes.

Picture: Beyond Redemption sketches by Richard Anderson, featuring the main trio of the story. 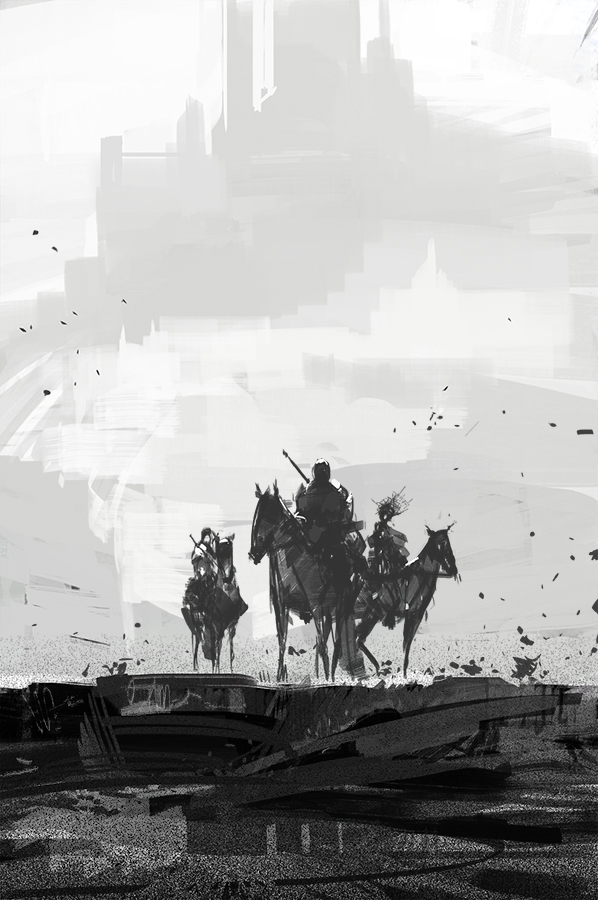 The main characters are very well-written; but don’t get me wrong, they are not the only ones. Each character in the book is equally well-written. They all have their own agendas, which tend to be evil and insane. Outside of the main trio, almost every other side character in this book has their own POV, which made the cast of this book more colorful in personality than many fantasy books in the market.

I don’t think I need to say a lot on this topic, but the world-building is done exceptionally well, Fletcher has established a mad world filled with intricate rules, history, and a vividly described environment. It’s a great setup for the rest of the series. My favorite aspect of the world-building is that every Geisteskranken in the book, came from our real-world mental illnesses such as Cotardist (Cotard’s Syndrome), Doppelgangists (Syndrome of Subjective Doubles), Hassebrand (Pyromaniac), Kleptic (Kleptomania), and Gefahrgeist (Sociopath) to say a few. The inclusion of these mental illnesses into this dark fantasy is what made the book very original and a one of a kind experience.

Finally, Fletcher’s prose in this novel really worked well for me. I read Fletcher’s other standalone Cyberpunk book, Ghosts of Tomorrow, before reading Beyond Redemption and I must say, his prose here is even more dramatic, engaging, and suited to my taste. I love how raw, brutal, immersive, and heartfelt the writing is. It also never fails to be thought-provoking and, most importantly, addictive. The only minor con I had reading the book was that I felt the climax sections could have been expanded a bit longer. It’s a really minor con and didn’t affect my overall enjoyment of the book.

I feel like I found a hidden obsidian gemstone out of nowhere. Not a lot of people have read this book despite how much its resplendent darkness shines. Right after I finished reading it, I had a strong feeling or delusion that this series, depending on how the second book goes, will become one of my favorite series of all time, and I shall continue immediately to the second book to see whether that delusion will manifest or not. I absolutely recommend this for any lover of dark fantasy. I hope my review of this book piqued your interest and that you consider picking it up. Otherwise, I guess you can say that:

“I am Beyond Redemption”

I’d like to also give a huge thanks to my good friend, Sarah from Booksprens, for recommending and giving me my first ever dedicated signed book. Thank you very much to both you and the author, Fletcher. This super early Christmas gift means a LOT to me! If we ever meet in real life, drinks are on me.

More in this category: « The Mirror's Truth (Manifest Delusions #2) The Stone Sky (The Broken Earth #3) »