Gripping, gritty and fast paced, Knight’s Shadow is a splendid sequel that’s better than its predecessor in every way.

I stated before in my Traitor’s Blade review that the book is a combination of The First Law series by Joe Abercrombie and The Three Musketeers by Alexandre Dumas, this book holds true to that statement more than ever, especially towards First Law as the series goes into grimdark territory. This means that Knight’s Shadow is s a book for adult fantasy reader, there’s graphic torture, violence and rape involved here and I would not recommend any young reader to read this series without any guidance.

That said, the direction that Sebastien took for this book improved the quality of this series on every aspect for me. Traitor’s Blade was a fun red but there’s some flaw in it that prevent the debut to reached its potential, Knight’s Shadow erased those flaws, no more Deus Ex Machina elements,  world-building elements are introduced more as we started learning more about the Saints, Dashini and a little bit of magic.

I won’t dive into any details on the plot to avoid any kind of spoiler on book 1. The plot in Knight’s Shadow started soon after the end of the first book, all you have to know is that it’s much more thrilling and gripping than before. The trials and tribulation that Falcio and the gang faced here is intense or you could also say, full of bad luck. It’s fast paced with great actions scenes and overall the book is a much more engaging read compared to its predecessor. I find myself struggling to put the book down every time I took a break, especially starting from the the second half of the book right after the Interlude when the story started going into grimdark territory.

I have high praises towards one particular scene; it’s foreshadowed in the prologue of the book, The Greatcoat’s Lament. This scene is definitely the best part of the book, heck it could even be the highest point of the series, it’s gritty, top notch and very well written. Everyone who has read this book will definitely know what I’m talking about here. 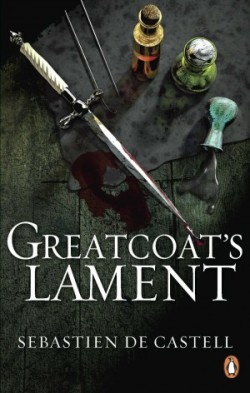 The character interactions are more intriguing than before. One of the minor cons I had with the first book was that I wanted Falcio to spend more time with Brasti and Kest, their camaraderie and friendship is definitely one of the strongest factors of the series and it pleased me to see that they do receive many more interactions here. Their camaraderie, bromance are solidified and I should also note, other than the great character developments for Falcio, Brasti, Kest and Darriana, my favorite character in the series so far will have to be Brasti, any actions or dialogue he has is simply golden.

“Happiness is a series of grains of sand spread out in a desert of violence and anguish.”

The only two minor cons I have with the book is that I find Falcio during the first half of the book was quite hard to get attached to, his personality, while necessary for his development was annoying to read. The other con is that I think some of the revelations were too predictable, not all of them though, some were really well done and I definitely didn't expect it.

Overall, Knight’s Shadow is a great sequel and a necessary addition in the Greatcoat series. Sebastien de Castell improves every element from the foundation that was carved in the first book for a more compelling read and experience. It was as I said before, hard to put down, compelling and I will definitely read what he left in store for me for the last two book of the series.