Bloody, consecration, philosophical, multitude of female casts, lesbian relationship and badass warrior nuns, Red Sister has been a wonderful surprise for me. After the struggle I had with the first 25% of the book, it’s a wonder how the rest of the book could made me love it but oh nun (ha ha ha) it did.

The plot of Red Sister, the first book in 'Book of the Ancestor' trilogy revolves around Nona, a young girl who was taken to Sweet Mercy’s Convent to master her skills in becoming a Red Sister, a Martial Sister specialized in armed & unarmed combat. Why was she taken there and what are the challenges she faced? Well, you have to read it yourself to find out. The story took place most of the time in the Convent and focused on Nona’s training for around 80% of the book, you can consider this more or less a ‘Harry Potter’ for adults or according to some readers, 'Kingkiller Chronicles' with a female lead.

Red Sister is a one character driven book with only Nona as the sole POV, every story in the book, you’ll see it from her perspective and it’s written in 3rd person perspective, sometimes switching to 1st person POV during flashback scenes. This is my first time reading a 3rd person high fantasy book with only one perspective to follow and honestly, I prefer 3rd person multi POV in my epic fantasy read but Mark managed to make it work.

Picture: Official artwork of Nona (I imagined her as X-23 with short hair from Logan though.) 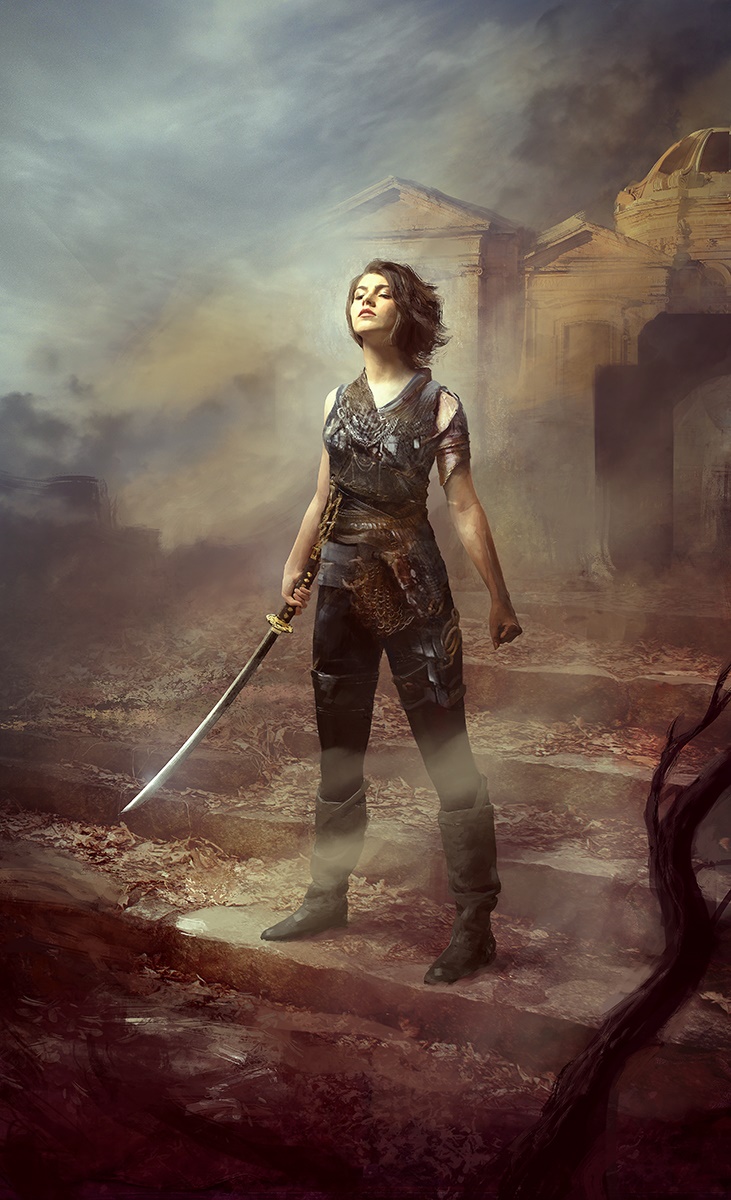 Nona is a great lead character with gradual development, she’s written realistically, loyal and kind to a fault despite her dark pasts but I do find her narrative unsuitable for her age. Throughout the story we focused on her year in Red Class (9-12 years old) and Grey Class (13-14 years old) but her narrative made her character sounds like someone in their mid-late 20’s, it doesn’t essentially make her a bad character though.

When it comes down to it, the main themes of the book focused more on friendship, trust and faith more than anything else. As I said before, this book contained a multitude of female characters, Arabella, Hessa, Clera, Zole, Abbess Glass and all the other nuns/mentors, they provide variety for Nona’s narrative. Reading the book, I realized Mark put a lot of planning towards all the characters, he doesn’t shy away from writing something new and different for the current market. For example, some of the nuns in this book had their lesbian relationship blatantly spoken, in fact Nona herself has been hinted to be a lesbian or at least bisexual. Now now, don’t come into this thinking you’re going to find some explicit scenes, you won’t but maybe in the future sequels who knows and I’m interested to know how the relationships between the characters will develop in the future.

Picture: Yumie from the anime Hellsing Ultimate (The kind of Sisters/Nuns you’ll find in the book.)

You’ll see the Sisters obliterate their enemies to shame regardless of their gender, mostly men but 90% of the few men in this book are either despicable, forgettable, or a coward so they kinda deserved it.

I must state one additional thing, I’ve heard some complaint from readers about these two question: “Why won’t the characters in high fantasy ever bathe?” and “why won’t the female characters showed any sign of having menstruation? it's unrealistic.” well, you’re going to see the characters bathe a lot here, they even raced for it sometimes and Mark actually implemented a scene where the character talked about their first menstrual cramp. (Again, no explicit scenes and I don’t really care about it, I’m just letting you guys know about it.)

The actions are gory and bloody, it has great climax scenes in both end of part 1 (the end of part 1 is the best part of the book for me) and part 2, uniquely complex magic systems, accompanied with beautiful and philosophical prose. Mark’s choices of words are poetic and sophisticated, here’s an example, let this quote sink in.

"Your death has not been waiting for your arrival at the appointed hour: it has, for all the years of your life, been racing towards you with the fierce velocity of time’s arrow. It cannot be evaded, it cannot be bargained with, deflected or placated. All that is given to you is the choice: meet it with open eyes and peace in your heart, go gentle to your reward. Or burn bright, take up arms, and fight the bitch."

Hearing all these praises, you’re probably wondering why I didn’t give it a 5 stars. Well here’s why:

2. The worldbuilding of this book is unique but at the same time I find it really confusing without any map for guidance. I’ve read a lot of adult high fantasy books and almost all of them contained maps, in fact, this is only the 2nd time out of many high fantasy books I read that doesn’t have one. I always loved how authors implement the maps into their story, it strengthens my immersion in the world and this is one of the cases where it would’ve benefited so much from it. I can’t get a sense of how far each location is and where they’re actually located because of it. Hopefully this situation will be resolved in the sequels. (This is for the ARC edition, I have no idea if the official release will have one or not, I sincerely hope it will.)

As you can see, these are minor cons and definitely a “it’s not you, it’s me” situation so you may not find these cons a hindrance at all during your experience.

“A book is as dangerous as any journey you might take. The person who closes the back cover may not be the same one that opened the front one. Treat them with respect.”

This beautiful quote summed up my overall review towards Red Sister, I opened the book underwhelmed by the beginning of the story, closed the book at the end feeling amazed for the great improvement and how well it’s set up for the rest of the trilogy. Red Sister is a great beginning to a new trilogy, this is the first Mark Lawrence’s book that I read and it certainly won’t be the last, I’m excited to read his Broken Empire and Red Queen’s War trilogy more than ever now.

Side note: There's one chapter dealing with animal cruelty. If you're not up for it, you might want to skip or skim the chapter.

More in this category: « The Name of the Wind (The Kingkiller Chronicle #1) Arcanum Unbounded: The Cosmere Collection (The Stormlight Archive #2.5) »