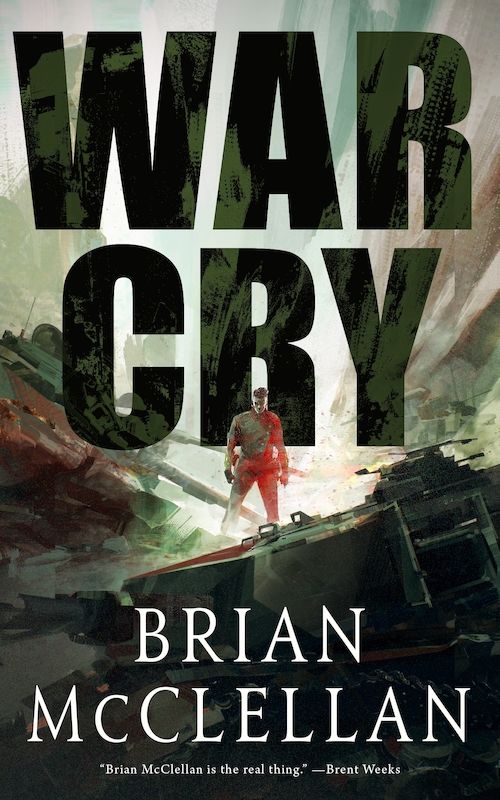 Everything Brian McClellan has written, that I have read, I have loved. The original Powder Mage trilogy, Sins of Empire, the novellas in-between – I’ve lost myself in that world for long, sleepless nights filled with unforgettable characters and the smell of gunpowder.

Of course, anything Brian publishes outside of that world is going to have the hard task of following up on his revolutionary-era epic, and a novella the size of War Cry (94 pages long) is very much limited in what it can accomplish in terms of worldbuilding and memorable characters. The Powder Mage universe is a tough act to follow but War Cry is different enough, and it has an interesting premise. Let’s take a closer look.

The world quickly gripped me, and the plight of main character Teado was relatable. The abysmal hardships Teado and his platoon of guerrilla fighters are weathering through will be familiar to anyone with basic historical knowledge of World War I – food shortages, The platoon has likable enough characters – illusionist Bellara, her brother Rodrigo, and officer Aleta are some of the characters that have some development, whether through action, their own dialogue or that of others, and they’re an interesting bunch I’d have liked to spend more time with.

The action is fast-paced, clear, and filled with magic. I’ve always enjoyed Brian’s take on magic, and he introduces a new system that he’s put some thought in. I wanted to see more of it; Teado is a Changer, which is self-explanatory. Bellara is a Smiling Tom, meanwhile, which is all about illusions and their war-time application; camouflage, misdirection, removal of the engine sounds of an airplane and such practical matters. Magic used for anything else other than the war effort is punishable as treason, or the closest thing to it – and I loved that small morsel of information. The hints of a larger world always served to intrigue me, pull me in deeper into this short narrative. My greatest complaint is, War Cry feels like the opening act of a larger novel; in all honesty, I wish we could get that novel instead.

The novella is written in the first-person point of view, in the present tense. First-person I love, but the present tense has always been a bit of a pain to get used to.  It is executed well, I at no point noticed any issues with either the tense or the point of view which comes as no surprise – McClellan has a lot of experience head-hopping between different characters with no issue, and he only ever inhabits the head of Teado here.

It does feel like War Cry is a novel, and I do think that a part of the blurb is somewhat misleading: “Desperate and starving, armed with aging faulty equipment, the team jumps at the chance for a risky resupply mission, even if it might mean not all of them come back. What they discover could change the course of the war.” Except…that’s hardly what happens, is it? It’s nothing they discover during the resupply mission itself, it’s what happens much later that could change the course of the war. And even that is a matter for debate, considering how War Cry ends.

There’s enough in War Cry to recommend this novella, especially on a sale, which is how I got it. The Kindle price is low enough too, it seems – for traditionally published fantasy, anyway. My score for War Cry is a 7/10 – a good read but not great. An enjoyable hour—an hour and a half’s worth of reading in a setting reminiscent of a historical event that doesn’t see too much reimagining in fantasy.