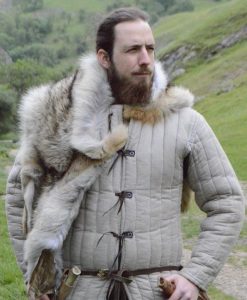 Rob J. Hayes, first of his name, writer of words, winner of SPFBOs, father of beagles, and I will have my vengeance in this life or the next.

Never Die. It is not my debut. I've been around the block.

Editor’s Note: Over at booknest.eu, we are very fond of Rob. We can supply all of you with character references, if you don’t believe him!

Slash, stab, death, back from the dead, a quest from the gods, impossible odds, redemption.

Editor’s Note: A succinct and very correct retelling of this contender’s novel. Weeeeeell…

I'm the ex-heavyweight champion of the world.

You'll have to prise it from my cold, dead hands.

Editor’s Note: It didn’t have to come to this, Hayes! 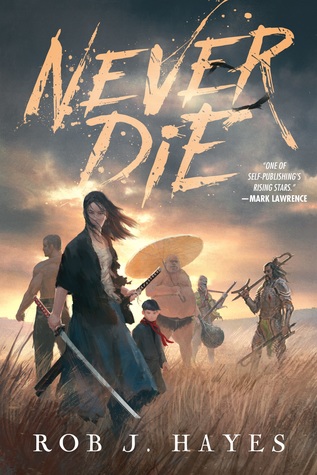 This time around? Mihir kept bugging me.

Editor’s Note: We get that a lot. Seriously. Our AI hasn’t worked out all the kinks and intimate knowledge of birds…that’s a big one!

Thank you for doing this, Rob, and we wish you the very best of luck over what is certain to be a tough competition!

NEVER DIE is a stand-alone novel by popular grimdark novelist Rob J. Hayes (The Ties That Bind, Best Laid Plans, Drones). I've always been a fan of Rob J. Hayes and will recommend all of his books to those who want an awesome dark fantasy story. I think he stands up there with Ben Galley and Mark Lawrence for stories that are just plan good. Never Die isn't quite up there with the Best Laid Plans series but is certainly as entertaining as Drones. I also applaud the book for having a non-Western setting with this having a Chinese/Japanese fantasy kingdom as its premise.

Rob J. Hayes won me over with a little book by the name of City of Kings, published last year. The book in question was among my favourite works of grimdark fantasy for the entirety of the year, and it had a lot going for it, chiefly a gripping ensemble of characters, each of whom was possessed with a unique voice, personality and view of the world. I loved the lot of them to death, and if you’ve somehow missed out on City of Kings, you can read my review of that novel over here.

The band of heroes and anti-heroes in Rob’s latest novel… I love them to life! A statement strange enough, I confess, until you read Never Die’s blurb:

Time is up for the Emperor of Ten Kings and it falls to a murdered eight-year-old boy to render the judgement of a God. Ein knows he can't do it alone, but the empire is rife with heroes. The only problem; in order to serve, they must first die. Ein has four legendary heroes in mind, names from storybooks read to him by his father. Now he must find them and kill them…

In that sense, my love for these heroes is strong enough to bring them back to life. But I am getting ahead of myself. Never Die’s heroes are as different from one another as you might expect from Hayes, if you’ve experienced his previous work. First among these heroes is Itami Cho, known far and wide through the land of Wuxia as Whispering Blade. Itami is an honour-bound warrior of great prowess, whose great fault stems from ever-present guilt -- no matter the oaths she swears, Itami lives to see them turn to dust. She has only ever managed to keep one of her vows; to keep the second of her blades sheathed, no matter what comes. The mystery of that sword is one the author takes his sweet time building up, and its pay-off is…well, I wouldn’t want to spoil the revelations coming your way.

Zhihao, the Emerald Wind, is the second “hero” recruited to Ein’s doomed quest. Unlike Itami, he’s no paragon of justice; all the tales told of his heroic deeds are either bluster or serious misinterpretation of events by second-hand witnesses. Zhihao is little more than a thug with a heart of gold whose wrong choices hound him in his second life (as they probably did during his first). I liked Zhihao despite myself, at first; his humour and search for redemption warmed me to this twin-blade wielding brigand, and his special ability to move through the world certainly helped.

Then we’ve got Iron Gut Chen, Chen Lu to his friends, an extremely fat man who cares for food, drink, and a crowd to listen to his boasts and heroic deeds. I liked him well enough, and the imagery of an extremely fat man with nothing but a loincloth and an umbrella doing all the ridiculous feats of strength this guy pulls of is…well, it’s thoroughly entertaining.

Rounding up this quintet of mostly alive heroes are Roi Astara, Death’s Echo, a mysterious leper viewed both as an assassin and a hero for his many feats; and Bingwei Ma, The Master of Sun Valley, the greatest master of unarmed combat, undefeated and with Batman’s moral code and Superman’s sunny disposition!  They come in a bit later than the rest, but I had a particular fondness for Bingwei Ma, in particular.

The setting, as you probably guessed, is inspired by Eastern culture (Chinese history, martial arts and Japanese anime). In fact, I’ve never read a book that felt more like an epic anime! My innermost dream right now is to see someone pick this novel up and turn it into a stunning anime. It certainly deserves the treatment. Hayes’ descriptions are so visual and kinetic, second only to the dialogue he writes.

Here, again, I’ll draw a comparison between this novel and Hayes’ City of Kings – I vividly recall coming across a few sentences, now and then, which broke my immersion somewhat, in that novel. Very few and far in-between, but they were there; Never Die didn’t have a single one of those. It’s worthwhile noting how many pieces of the dialogue spoken by different characters, especially towards the end of the novel, can be parcelled out and quoted to your fellow fantasy nerds during dinner parties! It would be no lie to point out that Rob J. Hayes’ prose has developed even further over his work on Never Die; like Benedict Patrick, he too seems to grow visibly better with each new novel penned.

Never Die switches gears for its last six-seven chapters. Where before the story had a slightly adventurous feel to it – a band of heroes going from one place to another to increase their number – these last few chapters sketch a wider conflict, brutal and reminiscent of Hayes’ blood-curdling siege in City of Kings. But the personal, gratifying one-on-one battles are not done; far from it. Everything leading to that final showdown is exhilarating, and the bomb-shells keep on dropping ‘till the very last page.

All throughout, Rob treats us readers with one badass fight after another; most of the main characters end up beating the living crap out of each other, or otherwise facing off through some convoluted challenge. The battles--and I can’t stress this enough (try as I might)--are like a shot of adrenaline through the system; if you’ve ever liked an anime battle, they will immediately fill familiar; and if you haven’t, they’ll still be cool as hell. Steel against steel, the sound of rifle fire and the smell of gunpowder, sweat, and metallic taste of blood – these are but a fraction of the images I came away with, after reading this delightful novel.

Books like this deserve to be read by all lovers of fantasy. It’s got just about everything you could ask for in the genre; and a few things you’d never think to ask. And now, onto the score:

What a great way to start off my indie fantasy experience for 2019! Now, I can’t help but wonder – what’s next for Rob J. Hayes?

Disclaimer: I received an e-ARC from the author in return for an honest review.