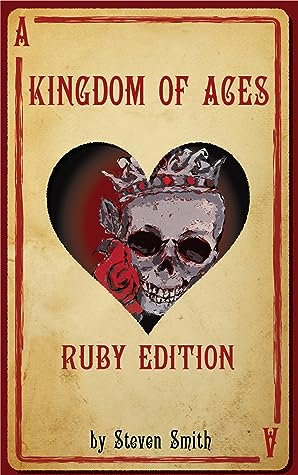 *This was one of my assigned books for SPFBO2020*

Welcome to Curillia, a curious kingdom with a Queen who has a chip on her shoulder the size of a boulder.

There were definitely some interesting elements to this story, along with some perplexing ones, too. By far, my favorite thing about this tale was the Queen. She was quite an enigma, and as far as antagonists go, fascinating and well-done. I love a good antagonist, and was immediately curious about her: why was she so uptight all the time? Why was her son such a spoiled brat? Why did she feel like she had to control everything? Unfortunately these questions don't necessarily get answered, and neither do several plot elements that caused me no small amount of frustration.

We are thrown into a kingdom (which was actually a queendom, but the book refers to it as a kingdom) that all the neighboring countries fear and hate because of its powerful ruler. She has a son who likes to antagonize people for seemingly no reason, and it causes political tension, and outright war. The strong points of this book - namely, Queen Maylin and her son Corris and their character development - are overtaken by the looming plot holes and confusion of what is actually going on and why. There are several scenes early on in the book that set up the rest of the story, but because of said plot holes, it never comes together or makes sense, and the holes aren't ever filled.

For example, Corris is at sea and stops a neighboring country's traveling vessel that is carrying its princess. It is mentioned that only the Queen can request trade documentation (why? It's just not good policy, but seems to be thrown in there to amp the tension). It's never explained why Corris could so easily conquer said ship, and the princess's guards aren't mentioned until a good halfway through the scene where they just sit back and watch Corris take over the situation. The princess answers Corris's questions (she could have easily lied), and in the midst of being completely conquered, the mother of the princess actually slaps Prince Corris in the face for his insolence... when he'd been threatening to kill them, and very easily could. I couldn't get into the scene at all, and this happened repeatedly throughout the book.

Questions like these arose throughout each scene I read, and it was especially frustrating when Queen Maylin is set up to be this cunning, conniving ruler yet she, too, often makes stupid choices. She was unaware a huge army had been raised by a dark lord on the outskirts of her kingdom (and the question is even asked by her, yet no explanation given) and the plot just races along like it's no big deal. She confronts said lord herself instead of sending someone in her stead (he could have easily killed her), yet along we trot into the story with no answers. Even the very last scene doesn't make sense - silly mistakes are made, and people who would *never* walk away from a fight before making sure their enemy is dead, do so. It's all just too convenient.

One thing I will say: although the plot had incredibly frustrating holes, the writing itself - although there were several grammatical errors throughout each chapter - was easy to follow. With a good editor and a lot of honing and sculpting, this could be a rip-roaring, fun adventure of a story.

I don't like leaving negative reviews. But that's the nature of this SPFBO beast. Queen Maylin had intrigue in spades (HA! YOU SEE WHAT I DID THERE?), but her towering presence wasn't enough to rescue this tale. Good luck to Mr. Smith and his writing endeavors. The bones are there, and his writing is well done, but the story needs some fleshing out and a good editor.