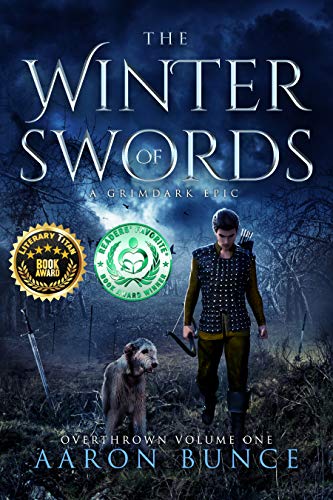 The Winter of Swords kicks off with a family enjoying a casual hunt in the woods near an ominous set of ruins. It bares all the hallmarks of calamity waiting to happen. Luca, the youngest of the party, pretends to sword fight with his brother Hunter, while two older men hunt for food. Eisa, Hunter’s and Luca’s sister, has a few moments where she gets startled, leaving the reader with portentous feelings. These feelings prove true when a six-limbed monster (I honestly imagined the mindflayer from Stranger Things season 3) snatches Luca and uses him all angler-fish style to capture the others. The two older hunters are brutally murdered off page (though we see their mangled bodies), Hunter is beaten (to death?) and Eisa is abducted for nefarious (but not sleazy) purposes.

End of Prologue…Part 1, I mean.

As of chapter five, the reader is introduced to an entire new set of POV characters: Roman (an orphan with a bad past), Julian (an inexperienced soldier who does soldier stuff), and Dennah (a woman).

Now, I’m no stranger to the false protagonist shtick. I enjoyed the way Hugh Howey pulled it off in Wool. However, I was not prepared to have every POV character torn away from me and replaced by a whole new set. Especially considering this change takes place ten percent of the way through an eight-hundred plus page manuscript. I had already gone on this emotional journey where all three characters were left dangling, and they weren’t even the characters I was supposed to care about. It was like starting an entirely new book.

Also, looking at the blurb on Amazon, there’s no reason to think tWoS isn’t about Luca, Hunter, and Dennah – an orphan, an inexperienced solider (maybe), and a young woman. A Prologue – even one that is four chapters long – would have told me that this part of the story was pertinent but not necessarily essential to the rest of the book.

It bothered me way more than I would have expected, but I wanted to give The Winter of Swords a fair shake so I pressed on.

Roman and his dog set out to deliver a message to a family with which he has a complicated history. Oh, but they’ve all been murdered and a traumatized girl stabs Roman with a pitchfork. Classic.

Julian is a guard and ohmygod gnarls are attacking. Gnarls everywhere! So much violence.

Dennah is traveling with a bunch of men, and oh wouldn’t you know one of them starts laying down some rapey vibes. Good thing a nice old man says she has fantasy crabs.

At this point, I skimmed through the chapter headings in search of the original cast.
They were absent. I assume they’re significant somehow to the rest of the Epic (there are already 2 or 3 sequels).

I made it to the thirty percent mark before I finally invoked the Rite of the Thousand Books.

Unfortunately, the Winter of Swords wasn’t for me. Aaron Bunce is clearly a capable writer. His prose is sharp and specific, evoking strong mental images. I think his characters are fine. Personally, I was more invested in the trio from the not-prologue than in Roman, Julian, or Dennah. The dialogue reads as stilted in places, especially the internal dialogue, and there were a number of times I was thrown from the story because of clumsy phrasing.

I didn’t get far enough in to really comment on the magic system though there was some in the first two hundred or so pages. Healers are common, and whatever monster abducted Eisa brought her to some kind of wizened humanoid.

The world seems a pretty grim and dark place where monsters aren’t uncommon, which for me called into question the decision to bring three children along on a semi-dangerous hunt near ominous ruins, but then again…the story has to happen.

All in all, the first two-hundred and fifty pages of the Winter of Swords disappointed me. The good news is I’m just one reader. It didn’t resonate with me, but that doesn’t mean you shouldn’t give it a swing.

More in this category: « The Dragonslayer of Edgewhen (An Edgewhen Adventure Book 1) by Jason A. Holt - Book Review The Empress of Timbra: Book One of the Hidden Histories by Karen Healey and Robyn Fleming »