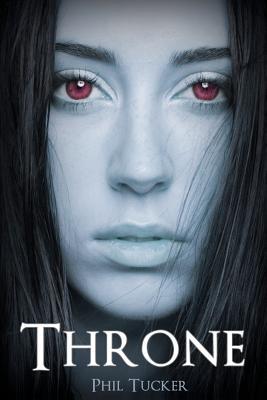 Maribel is a beautiful artist who seems to have it all: a loving husband, a successful art gallery, and a new baby on the way. But when her child is born prematurely and abducted from the hospital by a mysterious creature, she embarks on a journey of despair to take back the stolen child.

Maya, on the other hand, is a beautiful orphan trapped in a series of New York sweatshops. Though her life is hard, she yearns to reconnect with her parents who are…somewhere.

Each woman is selected by opposing Fae factions: the Seelie Court and the Unseelie Court. Their war has gone on for millennia and each side seeks a new queen to lead them to dominance over the other. How much will Maya and Maribel have to sacrifice to achieve their goals, and to what ends will they go to secure victory?

Throne begins with sorrow as the reader is thrust into Maribel’s past and present. We are treated to a bit of her history with her husband and their travels before we experience her heartbreaking loss. Something, I must say, I found moving especially considering the maddening circumstances afterward where, ya know, no one believes her about the monster.

I’m sure there’s commentary there.

Maya is similarly abused by life as she is almost immediately harassed by a fellow restaurant employee. It’s enough to make the reader uncomfortable without just putting the book down, and it paints stark picture of her life before we take a left turn into fantasy.

Along the way, both women make new friends and encounter strange beings such as: a talking fox, a phooka, angry giants with razors, manbearpig (I kid, Jimmy the man pig thing is the best), and a whole bunch of other assorted creatures. Some live. Some die. There’s a bit of a life and death, construction vs. destruction dichotomy going on here.

There’s a big ole’ battle, and then it ends.

All in all, I thought Throne was fine. As immediately gripped with Maribel’s story as I was, I found myself quickly losing interest as her relationships deteriorated at an alarming rate. And with Maya, things fell in place or fell apart at convenient times in a way that while not feeling exactly forced, also felt a bit contrived.

I really liked the ideas here but thought the plot was a little thin. While the two main characters were pretty well fleshed out, I found the ensemble a little one dimensional. People do things for inexplicable reasons or because they merely felt compelled. I realize part of this is built into the world with magic, but it still cheapened their relationships in my estimation.

About half-way through, a McGuffin is introduced as the means by which either woman can ascend to their throne, and while the object is pretty cool, I couldn’t help but feel like what began as something of a character study suddenly became a Legend of Zelda side-quest. Not hating. I love Legend of Zelda. It just felt disjointed.

In conclusion, Throne has its moments where it really shines, and Tucker’s prose is really something to behold. However, the bland secondary characters and inconsistent tone detract from a story comprised of a lot of cool ideas and two strong female leads.

More in this category: The Stars Within by Lena Alison Knight & Shimmerdark by Sarah Mensinga - Book Reviews »