BookNest has once again the honor to be one of the 10 Judges in this year's SPFBO. As a matter of fact, we were so excited that we ended up buying some cosplay costumes. From now on, whenever we judge a book we will be dressed like this: In a previous post on our Facebook Group, I announced that Dyrk Ashton, a fan favorite of our community, and Rob J. Hayes, the winner of last year's SPFBO, will join the BookNest.eu team for the first round of this year's contest. In this post I'll introduce the other members of our team, and how things will go down on our side.

Our initial batch of 30 books has been split into 6 groups of 5 books each. Dyrk Ashton and Rob J. Hayes will join our very own Michael McLendon, C.T. Phipps and Katerina Papasotiriou, as well as the guest Lynn Kempner (Grimmedian). Each one of them will read the 5 books assigned to them, review all of them (*without* rating them) and pick the best one among them, which will proceed to the second phase of the 1st round as a Semi-Finalist. That's right, you understood correctly - we will review all 30 books assigned to us! I (Petros) will then proceed to read all 6 semi-finalists and pick the best one among them to be our Finalist in the 2nd round of the SPFBO.

In the second round I'll be joined by Rita Sloan to read and review the Finalists of the other 9 Judges.

Here's the aforementioned groups, and the Judges assigned to them:

IMPORTANT UPDATE: Since several of our members read We Ride the Storm and found it to be *excellent*, we've decided to promote it as an *extra*, 7th Semi-Finalist.

Michael will still pick a Semi-Finalist from his remaining batch of 4 books.

Best of luck to all of you,

Bloody Rose is one of those books that make you want to go back and lower every single rating you've ever given, simply so it will stand above everything else.

Read more...
Tagged under
Published in Petros' Reviews Be the first to comment!

The Deathless by Peter Newman 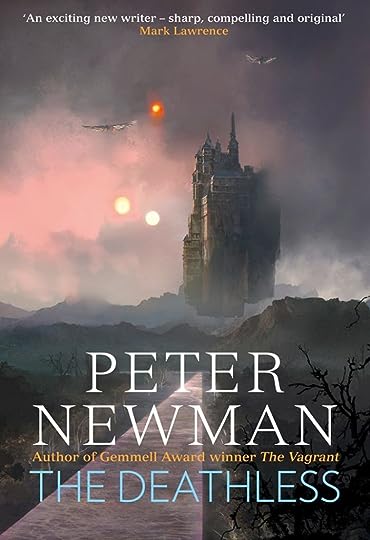 Fantasy Fiction has an ever-evolving nature. Throughout the years there has been a number of prominent authors who had the ability to alter its natural course. Some of them heavily influenced the genre to the point that whole new sub-genres were created, and others nudged it to a new direction ever so slightly that was barely even noticeable, but helped modernize the genre all the same. Peter Newman is one of the latest.