27, Oct
Published in Blog Be the first to comment!

The Dark Lord has spoken!

After much consideration, detailed reading, and blood sacrifices, Petros as decided to send... 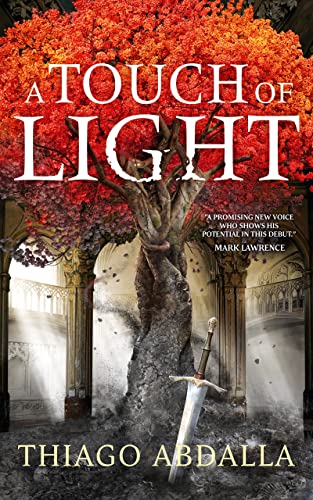 We would like to offer a special congratulations to Thiago Abdalla on his remarkable story, which captivated both Rai and Petros, to all of our other semi-finalists, and to everyone who shared their stories with us this year.

To the other nine blogs, we offer a special thanks as this competition wouldn't be possible without your incredible and dedicated teams.

Read more...
Tagged under
Published in SPFBO 8 Be the first to comment!

The Binding Tempest by Steven Rudy is exactly the kind of book I hope to find when I participate in SPFBO.

It has a compelling story, rich characters, and an interesting world with an advanced Victorian steampunk aesthetic I love. Magic and technology go hand in hand as conspiracies abound and the plot thickens. The story does struggle a little in the beginning as we’re introduced to new character POVs each chapter, but they very quickly overlap. Also, this level of front heavy worldbuilding feels necessary as the foundations are laid for the adventure.

The story primarily revolves around Ellaria Moonstone, a hero of the Great War, who seeks to uncover the powers seeking to upend the young and vulnerable Collation of Nations. Unfortunately, for her and her comrades, the council has elected to raise a new king, which precipitated many of the problems that led to the war in the first place.

From Ellaria, we move on to Kovan, a mysterious ally of Ellaria’s who seems instrumental in setting the world to rights, Tali, a Whisper Chain messenger, who gets more than she bargained for, and Learon, a young woodsman whose world is upended by his father’s mysterious journal and the enigmatic stranger Elias.

In conclusion, I very much enjoyed this book and will be picking up the sequel when money allows me a hardcover copy. The e-book struck such a chord with me that I ended up purchasing a physical copy for my personal library. It has remarkable quality with chapter designs and customs maps.

I recommend this book for fans of the Black Prism by Brent Weeks, Brandon Sanderson’s Era 2 Mistborn books, or for those who enjoy some steampunk in their fantasy. I would compare it a little bit to V.E. Schwab's A Darker Shade of Magic, although I think I enjoyed this more.

30, Sep
Published in Blog Be the first to comment!

Blood for Wages by Joe Coates is a western fantasy that feels like at times like Wake of Vultures by Lila Bowen meets Blackwing by Ed McDonald. While it never quite reaches the heights of the aforementioned comparisons, it is a grim and gritty story for who enjoy those sorts of things…which I do. The story revolves around a woman running from her past called Fia McCrae, outlaw Torsten Gunn, and Redmon Marr, a powerful man with shady connections. The story is pretty engaging, although I found the characters not particularly likeable. At the end of the day, it reminded me a bit of Abercrombie’s A Little Hatred in the same way listening to Greta Van Fleet makes me think of Led Zeppelin. On one hand, I enjoy GVF, but I always end up getting the led out. If any of those books are your jam, check out Blood for Wages. Maybe it will resonate a bit more with you. It definitely has grit.

Mark Lawrence’s SPFBO continues to pull in authors of dark and grimdark fantasy and Ashes of the Witch by Lucas Pederson is no exception. When former witch Gorecrow is betrayed by her crew the Skulltalons, she finds herself dead with little else to do but strike up a deal with Death and return for revenge. Through the Shifting Lands she travels, reaping the souls of those who betrayed her while seeking a copper doll containing an ancient god. This is a story of revenge akin to the Crow but with even more violence. While I found the cover art a little off-putting, I found myself enjoying the tale even as the first few chapters felt a little slow. It does end up feeling necessary as Pederson builds the world. All in all, this was a pretty solid read, and I would recommend it for those folks who enjoy dark fantasy with some horror elements and an action edge.

The Moon’s Eye: The Relics of War by AJ Calvin is a truly unique book among those I’ve been assigned in the three or four times I’ve judged the SPFBO. With a half-scorpion lead, my first inclination was to get Mummy Returns flashbacks, but as I settled in and acclimated to the world, I eventually embraced this stoic warrior Vardak, apprentice to the god Blademon. Vardak is tasked with protecting Janna, daughter of another deity, as she attempts to recover the Moon’s Eye. This item is needed to counteract a different relic, which can summon a big bad known as the Nameless. With lovely prose, creative creatures, and a quick pace, the Moon’s Eye is a fresh fantasy tale that feels like a classic. It doesn’t reinvent the wheel, but it does give it an interesting wash.

The Wastes of Keldora by Alex Raizman was the last addition to my SPFBO pile, and the last one I read. One of Alex’s previous entries, Strange Theology, was my semi-finalist back in SPFBO6, and although it wasn’t our finalist, I thoroughly enjoyed his writing. To be fair, I’m not a huge LitRPG fan apart from Sufficiently Advanced Magic, but I kept an open mind and dove in. The story revolves around Julian, a failed inventor transported to a different world and given the task of merging with a godcore and fixing the world. He accidentally merges it with his smartphone instead and sets out to build a factory in order to defend against the God of Chains. At around 250 pages, this was a quick read, and I would have liked to have seen more RPG elements. Again, my frame of reference is limited. All in all, apart from some typos, I enjoyed the book and would consider giving the second one a look.

With my SPFBO 8 journey at it's end, I would like to take this time to thank all of the authors for their hard work and compelling stories. Unfortunately, I can only choose one book to select as my semi-finalist, which will be Steven Rudy's The Binding Tempest.