The Republic of Thieves (Gentleman Bastard #3)

A great sequel but pales in comparison compared to the previous two book.

Let me begin by saying that if I read this book without knowing about Scott Lynch’s struggle with depression during his 6 years time of writing this book, I’ll probably rate this book lower. This doesn’t mean that the book received a better rating from me because of his depression itself, no, but it’s because the knowledge of that fact provide better understanding to some context in this book, specifically to why some parts are infuriating to read and why there are times when the words he wrote really hit home.

“I don't expect life to make sense," he said after a few moments, "but it could certainly be pleasant if it would stop kicking us in the balls.”

With the first book dealing mainly with revenge caper, the second more of a heist and piracy, this installment revolves heavily around politics and romance. The Republic of Thieves, the third book in The Gentleman Bastard Sequence series started off really strong. The first 30% of the book was so great, I won’t say anything else about it other than I thought this book was actually shaping up to the best in the series so far but sadly, the quality fluctuates a lot after that.

There are two main problems within this book that hindered me from giving it a better rating, first, the plot. The plot, as usual, followed the story telling tradition of the series, still told in the present and past (interlude) time frame and it continued that way from the beginning until the end of the book. The story started off 6 weeks after the end of book 2, Locke and Jean were approached by a Bondsmagi offering a chance that will benefit the both of them heavily, in exchange for their help to rig an election in the city of Karthain, the city of the Bondsmages towards her favor.

Sadly, this is where the book really lacked in substance and depth, once they reached the city of Karthain after the 30% mark of the book, the book plunged you into this election rigging in the present timeline until the end. It’s not necessarily a bad thing if done correctly but the politic part was just so boring to read. Don’t get me wrong, I love politics in my epic/high fantasy books but this time it’s an exception. I feel like the politic itself is so pointless to the main overarching story and my feelings were proven right by the characters statement itself in the book. Not only this, the main plot of the ‘interludes’ section deals with them trying to enact a play called ‘Republic of Thieves’ and again, it’s boring. There’s just no intensity, no sense of danger throughout the whole book except for the first 30% and the epilogue.

Yes, there’s still scheming but the book lacked the necessary elements from the previous books that made the series so enjoyable to read such as heists, Locke’s wits, but most of all, the bromance between Locke and Jean are so scarce here, the reason for this is one of the main theme of the book deals with romance, which is my other main problem with the book.

Ever since book 1, we’ve been told several times of this mysterious lover to Locke Lamora named Sabetha and Scott Lynch did a great job building up expectations for her character. It’s safe to say, my expectation turns out to be a major disappointment. Not only she’s not a compelling character like the other cast of The Gentleman Bastards, she’s so infuriating, I dislike her almost as much as I dislike Denna from The Kingkiller Chronicle, which should say how much of a pain she is. She’s smart and a rival to Locke in terms of wits and intellect that’s for sure but her personality are insanely horrible. Like Kvothe’s infatuation with Denna, Locke’s infatuation with Sabetha is more or less the same, throughout the book she treated Locke like trash and Locke can’t help but fall head over heels for her. There is a reason for this but it’s not 100% confirmed yet but the thing is, even if the reason is true their romance are still so painful to read. Sabetha captured the essence of the saying “Man will never understand woman” so perfectly. 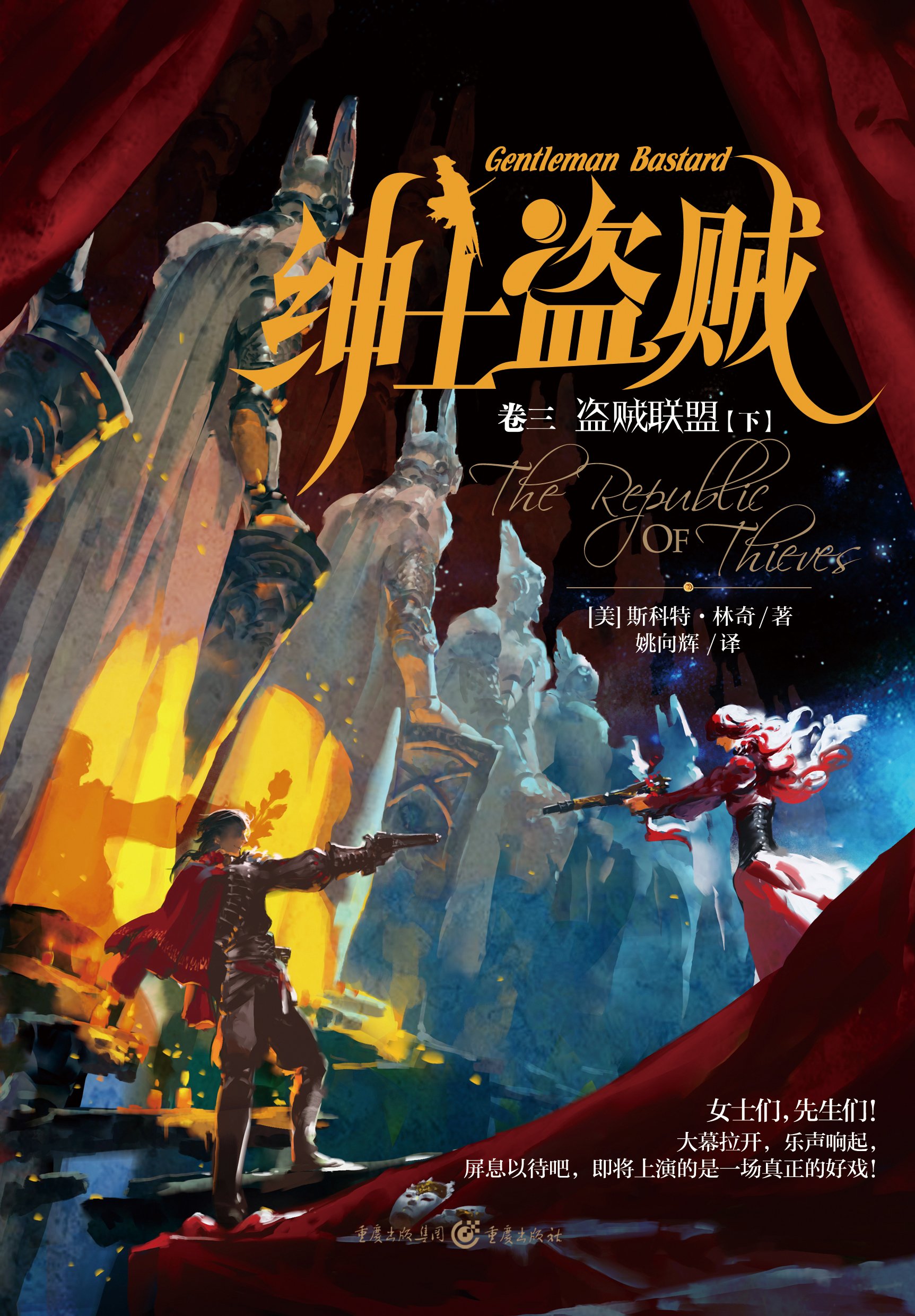 Although I dislike the romance of the book, I can’t help but give praise to how well written their relationship is. In fact, I think this is what Scott really wanted the reader to feel towards their romance, he wanted the reader to feel Locke’s love and pain towards Sabetha and I can’t help but feel there’s a subliminal message to Locke and Sabetha’s romance that were based on Scott’s divorce during the time of writing this book. I won’t spoil you on the details but there are a lot of words that brought real sadness to me, I feel like Scott conveyed his depression perfectly with Locke’s attitude and love towards Sabetha even though I don’t like it.

“He said that life boils down to standing in line to get shit dropped on your head. Everyone's got a place in the queue, you can't get out of it, and just when you start to congratulate yourself on surviving your dose of shit, you discover that the line is actually circular.”

The thing is, excluding the main plots, Republic of Thieves is without a doubt the best out of the series so far in providing character exposure and exploration to The Gentleman Bastards, even more than the first book in the series. This is really evident especially in the first 30% of the book and the entire “interludes” sections. Let me say this once again, the first 30% of the book is really fantastic because it revolves heavily around Locke & Jean friendship. Locke and Jean will always have a place in my heart as one of the best book duo of all time, along with Wax/Wayne from Mistborn Saga and Darrow/Sevro in Red Rising trilogy. (The Fitz and The Fool is a high contender from what I’ve heard so far as well.)

Picture: The Gentleman Bastards when they were young The amount of depth given towards Locke Lamora is simply stunning. His background, his personality and relationship development with the Gentleman Bastards are so well written there’s almost no way you could deny it. Locke is an amazing character, this book shone so much lights towards his character’s complexity and I can't wait to read more of his journey after this book.

Finally, in terms of writing, this is absolutely the best so far in the series. Yes, there’s less crude dialogues compared to before and the story itself isn’t as enjoyable to read compared to the previous two books but by all means this doesn’t implied that the writing is inferior. There’s a difference here, there’s no more info dump sections, every world-building aspect are explored gradually rather than shoving it in our face for 5 pages at once like before and the structure is really neat.

Looking at it, when I read the first half and the last half of the book, there’s a lot of differences in the tone and direction of the book here. This is probably due to the fact Scott’s depression changed what he set out to write at first. Here’s an excerpt of the interview done by SF&F with Scott Lynch regarding his struggle with depression and why it took 6 years to write this book, the titled of the interview is ‘Depression is a bastard.’

“I like to think that since I’m now a member of that tribe, I’m a little more cognizant about how I portray mental illness. But the depression isn’t reflected in it per se, everything else I frickin’ went through during those years is in that book, though.

Republic turned into a different book from what I started. That was the divorce. One of the most helpful things my mom said was that a divorce is like death. It’s like a third person in your life dies. And when I pulled myself back together and started writing again, I realized the story I was telling was not the one I started.” - Scott Lynch

I’m not an expert on this subject so I’ll just put one of Locke’s quotes as a message to you, anyone who struggled with depression because I feel this was written by Scott Lynch as a message to all of you.

“Quit being so hard on yourself. We are what we are; we love what we love. We don't need to justify it to anyone... not even to ourselves.”

Despite rating this book a 3.5 star, Republic of Thieves is still a great book. The rating is due more to my disappointment rather than the quality of the book itself. In the end, though inferior compared to the previous books in the series, this doesn’t mean that this is a book to miss if you’re a fan of the series. It provides a huge amount of depth to Locke Lamora and The Gentleman Bastards and I personally think it’s amazing how Scott created all three books with different settings and main plots surrounding the same main characters yet they’re all great to read. I like to add one more things, there is a high chance that the next book in the series, The Thorn of Emberlain will be amazing since this book is more or less a setup for the sequel.